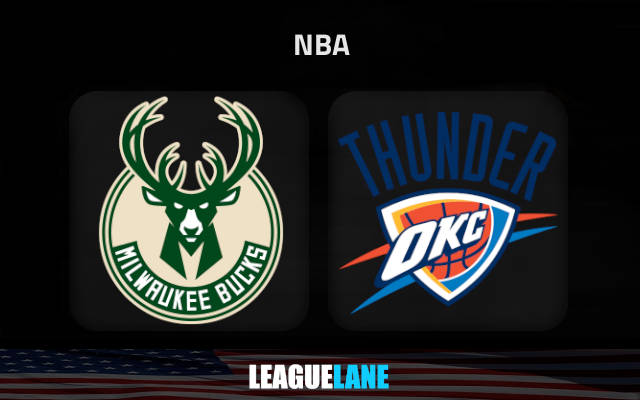 Milwaukee Bucks and Oklahoma City Thunder are set to run it again after meeting each other on Saturday evening.

Milwaukee Bucks have finally suffered their maiden loss of the season two days ago, falling 117-98 to Atlanta Hawks.

The Bucks shockingly lost the third quarter by 15 points which eventually proved to be the difference-maker on the occasion.

It will now be very interesting to see whether the Eastern Conference heavyweights will be able to bounce back immediately two days later when they travel to Paycom Center to battle Western Conference strugglers Oklahoma City Thunder.

This is an ideal game for the Bucks to rebound in, knowing that Oklahoma are only fifth from bottom in the whole NBA in offensive ratings this season.

Milwaukee are by far the best defensive team in the country and we would not be surprised to see the visitors limiting the Thunder to fewer than 100 points on Wednesday.

There is nobody to help Gilgeous-Alexander

The Bucks suffered their maiden defeat of the campaign on Monday, but Oklahoma City Thunder made it three consecutive failures after dropping the game at Detroit Pistons on the same day.

The Thunder continued to struggle offensively, scoring only 102 points (only a little worse than their season average of 106 points per game) two days ago at Little Caesars Arena.

As you are used to, Shai Gilgeous-Alexander was once again the only genuine offensive option for the Thunder, scoring 33 points and adding 7 boards and 5 rebounds to his overall stats for the game.

Oklahoma City have notched only 94 points in the weekend’s loss to the Bucks despite Giannis Antetokounmpo sitting out (was a back-to-back match for Milwaukee). We don’t expect a better scenario for them this time around either.

Both teams are much better defensively than offensively

This is a proper mismatch and we can hardly see any other scenario but a commanding victory for the Bucks, similar to the one from the weekend’s affair against the same opposition. You can back Milwaukee to win in -6.5 points at the -115 odds, while the Under 220 points has to be the way to go at the -110 odds.