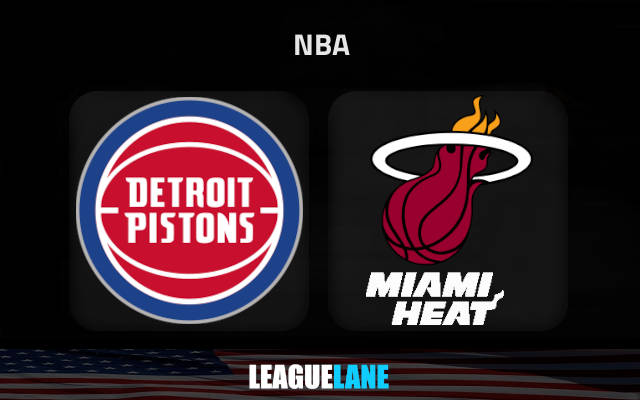 Miami Heat should not allow an upset on Tuesday night when they host Detroit Pistons who are one of the worst teams in the league.

The Pistons have the second-worst defensive ratings in the league

Detroit Pistons are the second-worst team in the Eastern Conference with a record of 6-19 so far in the season.

They have made some unexpected upsets so far, such as the last week’s shocking home victory over Dallas Mavericks when Bojan Bogdanovic pulled off his best showing of the season.

Nevertheless, these upsets have mainly come in Motor City. Detroit have a dismal 2-11 record on travels this term.

They have no playoffs ambitions whatsoever with the current roster and following such a horrendous start to the season.

The Heat had a tough road game at Memphis last night

Miami Heat stunned Boston Celtics in the second game of their double-header to inflict only the fifth loss of the season on the Eastern Conference leaders.

The Heat showed strength and quality when it matters the most, scoring ten points in the overtime to close the match 116-120 four days ago at TD Garden.

The Heat are still below .500 and they will need to initiate a winning thread if they want to compete for a playoffs position on the East.

This should be an easier game for Erik Spoelstra’s troops but we must not forget they faced the likes of Memphis Grizzlies on the road last night.

Will Spoelstra give rest to some of his star players and can Miami go unharmed against one of the worst teams in the league despite having a match last night?

The Heat should not drop the ball here

Miami did have a difficult match against the Grizzlies last night but we still see them as enormous favorites against the weak Pistons’ team here. Detroit are in the bottom-six in the league in both offensive and defensive ratings.

The Heat can ill afford to drop the ball against such an opposition on the home floor and we will back Spoelstra’s men to record a comprehensive victory here. Miami are -110 to beat the Pistons in -12.5 points on Tuesday.

We will also back the Under 215.5 points pick knowing both these teams are in the bottom half of the competition’s offensive ratings.