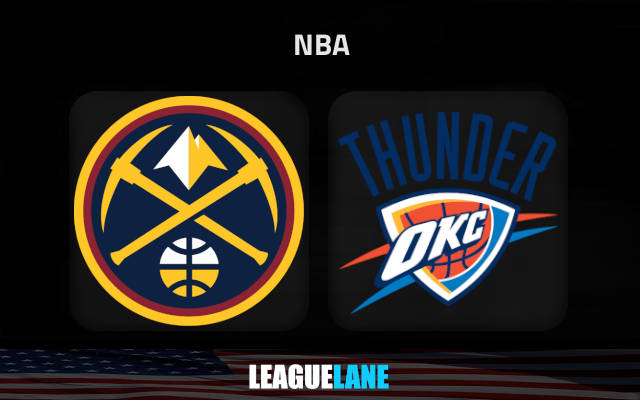 Oklahoma City Thunder will be searching for their fifth win on the trot on Thursday against division rivals Denver Nuggets.

The Nuggets are the fifth-worst defense in the league

It’s been a rollercoaster campaign for Denver Nuggets in the opening two weeks of the season. They showed hot and cold displays so far and will come into Thursday’s clash against Northwest Division rivals Oklahoma City Thunder with a 4-3 record.

The Nuggets snapped a two-win streak with a disappointing performance in the away loss to Los Angeles Lakers on Sunday evening.

They thus allowed the Lakers to get their maiden win of the season after a horrible start to the season.

The defense did not look great with 121 points conceded. Overall, Denver are struggling defensively being only fifth from bottom in the league in points allowed per game in the nation (112.9).

Nikola Jokic was 1-for-5 from the three-point line four days ago at Cryptpo.com Arena, while Jamaal Murray made 9 of his 21 attempts from the floor on the occasion.

Gilgeous-Alexander & stern defense is the recipe for Oklahoma’s success

Oklahoma City Thunder will go into this tie in much higher spirits as they managed their fourth consecutive win on Tuesday, beating Orlando Magic 116-108 at Paycom Center.

The Thunder are now tied with Denver Nuggets at a 4-3 record despite getting off to a terrible start with three successive defeats.

Shai Gilgeous-Alexander was fabulous once again, dropping 34 points in the mentioned win over the Magic.

Serbian international Aleksej Pokusevski stood out with 16 points and 9 rebounds two days ago. It will be very interesting to see whether he can replicate this showing against his compatriot Nikola Jokic on Thursday.

Last but not least, we must mention Oklahoma’s fantastic defense as Thunder are the fifth-best team in the nation in points allowed per match this term.

Oklahoma provide value at plus odds

As you know, it’s all about finding value in sports betting and this is exactly what we have the chance to do in the clash between Oklahoma and Denver on Thursday evening. The Thunder are on a four-win thread and you can get them to beat the division rivals on the home floor at plus odds. We’ll take Oklahoma’s moneyline all day long at the +100 odds, while Shai Gilgeous-Alexander is obviously well worth backing to score Over 27.5 points at the -110 odds.