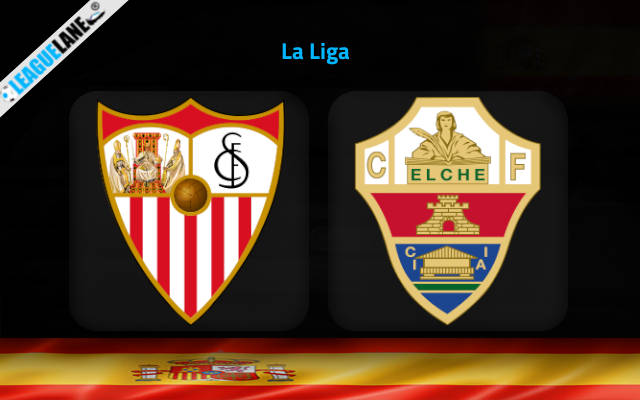 Sevilla vs Elche Predictions and Free Tips from our expert tipsters when the teams go head-to-head in Spanish La Liga on Saturday, 28 January 2023.

After having one of the worst starts to their campaign in history, Sevilla are desperately trying to make amends. They have now developed a habit of taking advantage of their clashes against teams from the bottom tier.

And a better opportunity will not come along any time soon. Elche are placed 20th in a table of 20, and are by far the absolute worst in the competition. They are the only team yet to register a win in the league.

Sevilla recorded a 2-0 win in the latest encounter between the two, and they won five of the past seven meetings. They scored two or more goals in seven of the former eleven clashes, and lost just once against this opponent in the past three decades.

Who will win the match between Sevilla and Elche?

Sevilla need this win, at any cost. It helps their cause that they have a phenomenal h2h record against this opponent.

Moreover, Elche are placed bottom-most in the table, and have a 100% winless record in the competition. They scored the least number of goals, and also conceded the most number of goals of all the teams in the La Liga.

And most of all, they have a 100% losing record on the road, barring just three draws.

Likely, count on the hosts to make the most of this opportunity, and deliver a winning performance.

Elche have the worst defense in the Spanish top flight, and conceded the most number of goals. It is quite concerning that the last they kept a clean sheet in a league fixture was back in April of 2022.

Moreover, Sevilla scored two or more goals in five of the past seven h2h encounters, and the last Elche kept a clean sheet against this opponent was back in 1997.

Elche scored the least number of goals in the current edition of the La Liga, and they failed to find the back of the net in four of the previous six h2h clashes. On top of that Sevilla kept clean sheets in their latest two fixtures.

They are desperate for a win, and will be extra careful with their defense. Likely, chances are quite low for Elche to slot in a goal this weekend.

Elche are the absolute worst team in the competition, and are placed dead last in the table. They are the only team yet to register a win this season. They lost five of the past seven h2h clashes, and their only h2h win against this opponent came back in 1997.

Meanwhile, Sevilla are determined to make use of this opportunity. They won six of the past eight overall fixtures, and lost just once in the past three months in all competitions. And in spite of all the issues they faced at the start of the season – they are still one of the titans of the Spanish top flight.

Going on, Elche conceded the most number of goals in the La Liga, and their latest clean sheet in a league fixture came in April.

They also conceded two or more goals in five of the past seven h2h encounters, and it has been 25 years since they kept a clean sheet against this opponent in an h2h meeting.

Likely, chances are quite high for goals to come in plenty this Saturday. The Over 2.5 Match Goals wager at an odd of 2.00 would be a great second bet.