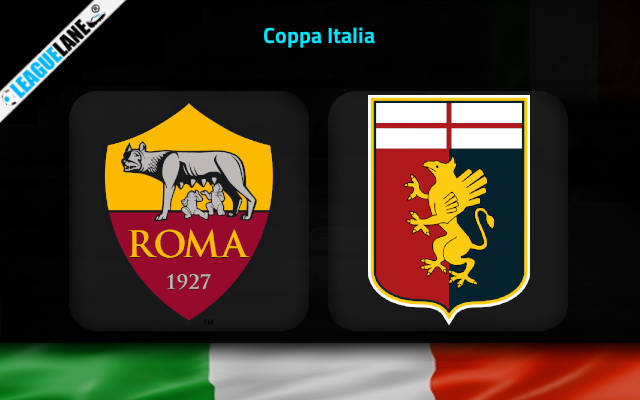 Roma vs Genoa Predictions and Free Tips from our expert tipsters when the teams go head-to-head in Coppa Italia on Thursday, 12 January 2023.

Following their 2-2 draw against AC Milan, Roma will play against Genoa in the Coppa Italia round of 16. Last season they reached the quarter-final round of this competition. They are sixth in Serie A and are one of the favourites to win this Cup.

Moreover, Genoa defeated SPAL by 1-0 in the second round of this competition. This is going to be their first game of the year. They are presently third in Serie B. Manager Alexander Blessin’s first concern before this game is his team’s fragile away form.

The host have an excellent unbeaten record against this team. The visitors have only won a single game against Roma which was nearly nine years ago.

At Stadio Olimpico, the last time Genoa won this game was more than three decades ago. Both teams last met back in February and the game ended in a goalless draw.

Who will win the match between Roma and Genoa?

We are backing Roma to advance to the next round of Coppa Italia. The past records show that they have dominated this fixture. Moreover, the visitors have a poor record away from home.

The first tip is that Roma will win this game by 2-0 – at 7.00 odd. The host have scored two goals in their last win against Genoa. Do also note that they recently scored two goals against AC Milan in their domestic league fixture.

Our second tip is that Under 2.5 goals will be scored – the odd for this tip will be at 1.94. The last three consecutive head-to-head matches ended with not more than two goals being scored. A similar trend is also observed at Stadio Olimpico.