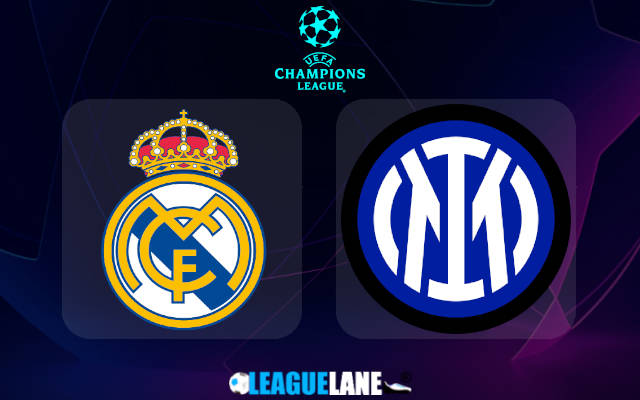 Real Madrid welcome Inter Milan for top of the table clash on matchday 6 of the 2021/22 Champions League.

The Spaniards have the edge as they sit with 12 points, also the home advantage. But Inter’s form cancel out Real’s and the Italians will be highly motivated, and nothing less than a win will help their course as they are second in the table with 10 points.

Nevertheless, both teams are guaranteed knockout place with third placed Sheriff and Shakhtar are way behind in the points table.

Madrid defeated Real Sociedad 2-0 on Saturday to register their 8th straight win across all competitions. They are currently unbeaten in 11, the last defeated happened at Espanyol right after the humbling defeat against Sheriff at the Bernabeu.

Inter on the other hand made it five wins on the bounce after crushing Roma 3-0 and interestingly four of them happened with clean sheets. They also have a long unbeaten streak of 11 games, the last defeated handed by a mediocre Lazio in the middle of October.

Rodrygo scored seconds before the final whistle at San Siro to hand Madrid a 1-0 win when the teams met for the reverse fixture in September.

The Los Blancos also lead the overall h2h against Inter Milan with 9 wins from 18 meetings across all competitions. But it is only narrow since the Italians have won 7 times as well with the remaining 2 games ending in stalemates.

Also, Madrid’s home record against the Nerazzurri is strong as they won 7 of the 8 so far with the lone defeat dating back to 1967 European Champions Clubs’ Cup.

If we look at the form chart of both teams, we can see a lot of greens, and this means that we are in for a treat on Tuesday evening at the Santiago Bernabeu. It is true that the reverse fixture at San Siro saw only 1 goal, but either team had plenty of chances to score three or more goals for themselves.

Now, the most important team news from Ancelotti’s dugout is the muscle injury to Karim Benzema. He is most certain to miss this game, that means Vini Junior is the key man in the attacking third for the Los Blancos. He bagged his 12th across all competitions on the weekend and the odds of 3.10 looks excellent value to bet on an anytime goal-scorer on matchday 6 of the Champions League.

Lautaro Martinez is another player to keep an eye on. He is yet to score a Champions League goal this season but netted in 3 of the last 5 appearances and is priced at 7/4 to score at Bernabeu.

I am not picking a winner for this match since I believe this is a fixture that can go either way. Since I am encouraged by the scoring form of these teams, the over 1.5 goals in the second half is my top recommendation.

At the same time, we may not go wrong by picking the combo of btts and over 2.5 goals full-time for 1.90 odd.