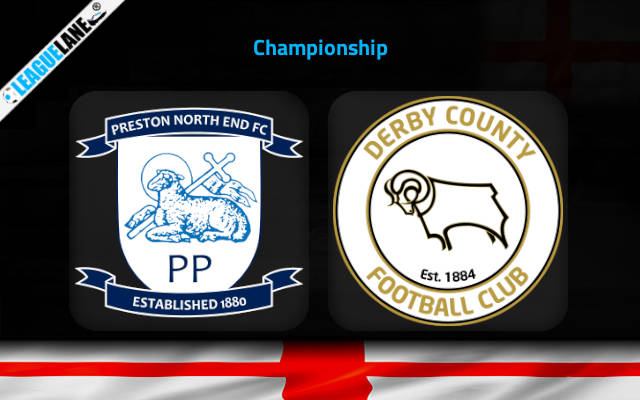 Preston take on Derby County in Saturday’s EFL Championship fixture at the Deepdale stadium. Read our Previews, Predictions and Betting tips with Analysis.

In the last 10 encounters between both these sides:

Preston come into this fixture on the back of a thrilling 3-2 loss away from home against QPR in a game which saw Emil Riis Jakobsen and Josh Earl score in either half for Preston.

On the other side of the field, the visitors, Derby currently sit rock bottom of the Championship table with just 2 points on board after 11 Championship games (as they were punished for certain reasons) as they have won twice, drawn twice and lost once in their previous 5 Championship games.

Derby come into this fixture on the back of a 0-0 draw at home against Swansea in a game which saw Derby have just 24% of ball possession as they had 6 shots on goal with 5 of them on target.

Taking the above into consideration, we back the odds at 2.06 for an Asian handicap of – 0.5 in favor of Preston. The hosts will have the upper hand coming into this fixture as they play at home and given the series of events that Derby County have gone through in the last few weeks, they will be facing a hug uphill task at Deepdale stadium.

Consequently, we back the odds at 2.00 for both teams to score in this fixture. The Derby players will be looking to give their fans some respite and hope that they will be in the races of being promoted next season.

In this game, both sides are expected to go out all guns blazing which should see both teams getting on the scores sheet.

Tips for Preston vs Derby