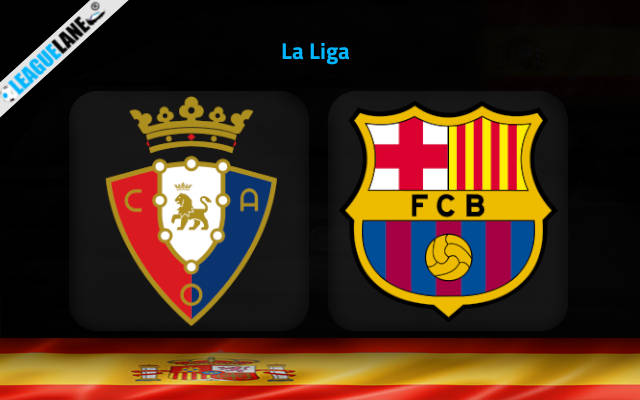 Barcelona has been knocked out of the Champions League following the group stage fixtures of the tournament. This is the first the club has crashed out of the competition in such a manner in 21 years. Along with their Europa League ambitions, the club should aim to finish within the top 4 this season as they are clearly out of the title race.

Osasuna on the other hand should be happy if they are able to cling to their reputation as a mid-table club as they have struggled in the league recently.

These teams will lock horns in Pamplona at El Sadar this Sunday. Read our Preview, Predictions, and Betting Tips with Analysis here.

Osasuna did start off their season fairly well as they lost just twice in the opening 11 games of the league. However, they have failed to win any fixture since then.

This terrible month of November for the club has dragged them to 10th in the league. They are now a couple of points behind their opponents for the weekend.

Blaugrana have taken 8 points out of a possible 21 since their loss in El Classico in October. They are now 7th in the league, 16 points behind arch-rivals Real Madrid.

I do however see the Catalonian club just about coming away with the win. With that being said, with the clubs having registered a combined 11 draws in La Liga a draw no bet alternative is a safer option.

Xavi has failed to guide his team to a clean sheet in away games so far. I don’t see that changing in this fixture as the hosts have scored in 5 of their last 6 league games. So both teams are likely to score in the fixture.