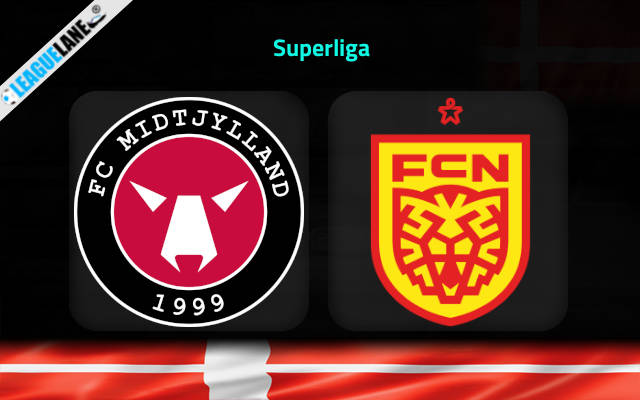 Nordsjaelland are the toppers of Danish top flight this season, and they are in phenomenal form. They are scoring goals in plenty, and they easily are the favorites this Monday against the inconsistent and struggling Midtjylland.

Midtjylland seldom kept clean sheets in league matches this season, and as a result their defense is currently under huge pressure.

They failed to make any kind of an impact even in front of their home crowd, and it should be noted that they were able to record just four wins at this venue in the past six months.

It also deserves mentioning that the few victories they have at this ground came against some of the weakest teams in the league.

Meanwhile, toppers Nordsjaelland are on a long stretch of unbeaten fixtures, and of their total two defeats this season, one had come against the fifth-placed Silkeborg.

They also have been the best team on the road in the entire competition. In fact, they lost just once away from home in the current edition of the Superliga, and all along they scored goals in huge numbers.

By the looks of things, expect a win for the first-placed Nordsjaelland this Monday at the MCH Arena.

Midtjylland lost 1-2 at home the last match-day in the league, against Odense. Defense has been an issue for them throughout this campaign, as they seldom kept clean sheets during this run.

Even in front of their home crowd they were unable to make any kind of an impact lately.

On the other hand, Nordsjaelland are on a long stretch of great performances. In fact, the last match-day they recorded a 2-0 win against Horsens, who used to be a constant worry for them.

In fact, they lost just twice since April, and they even scored five goals from their past two road trips.

As things stand, expect a win for Nordsjaelland this Monday.

Tips for Midtjylland vs Nordsjaelland