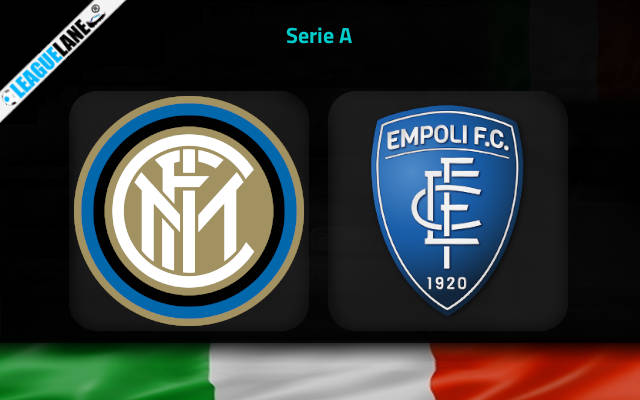 Inter Milan vs Empoli Predictions and Free Tips from our expert tipsters when the teams go head-to-head in Italian Serie A on Monday, 23 January 2023.

Inter are former champions of the competition, and are in the run for at least another podium finish this time around. It is also to be noted that their form has been really impressive in the past few months, after a rather tough start to their campaign.

Meanwhile, Empoli are stuck in the bottom half of the table, and they have just five wins to their name – despite the season having reached its halfway point. It is also quite concerning that they have just two wins on the road going back to December of 2021.

Inter have a phenomenal h2h record against this opponent. In fact, they are on a ten-fixture winning streak against this rival, and also won 16 of the past 17 clashes. They also have a perfect winning record at this ground since 2005.

Who will win the match between Inter Milan and Empoli?

The Milan-based team has an unbelievable h2h record against this foe. Going back 25 years, they have totally dominated this rival in almost all games, and particularly at this ground they have been even fierce beasts.

On top of that, Inter are on a nine-game winning streak at home at the moment, while Empoli registered just two wins on the road in the last 14 months. Surely expect the hosts Inter to have a huge upper hand this Monday.

Bologna last kept a clean sheet on the road back in September, and before that in May. Meanwhile, only toppers Napoli have scored more goals than Inter in the Serie A. Also they scored in plenty in h2h clashes throughout the past two decades.

Chances are quite high for goals to come in plenty this Monday.

Inter have a 100% winning record at home, barring a single game so far. And they let in just four goals all through the campaign at this venue as well. Empoli, who have just two wins to their name on the road since December 2021, are not expected to seriously trouble the hosts’ defense.

Inter have a near-perfect h2h record against this opponent. In fact, they won 16 of the past 17 meetings, and they have a 100% winning record at home in such fixtures since 2004.

They are also on a nine-game winning streak at home at the moment, while Empoli registered just five wins in total all through this season. Likely, a -1.5 Asian Handicap on Inter at an odd of 1.83 would be a great tip for the day.

Going on, they have been best offense in the Italian top flight this season after toppers Napoli. Meanwhile, Empoli have just two clean sheets to their name in the past ten months, and conceded goals in huge numbers all through the last 25 years in h2h meetings.

Chances are high for this game to turn into a high-scoring affair. As such, the Over 2.5 Match Goals at an odd of 1.67 would be a great second tip.