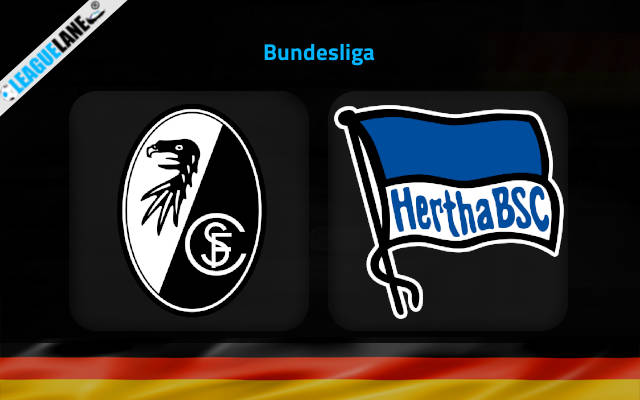 Hertha Berlin are sinking deeper and deeper and they could easily drop into the bottom three in the Bundesliga standings sooner rather than later.

Tayfun Korkut’s men are only one point above Augsburg in the position that leads to the relegation playoffs.

They have not been pulling up any trees of late and will travel to Europa-Park Stadion to battle European competitions’ hopefuls Freiburg winless in seven successive outings across competitions.

Hertha lost four and drew one of the last five matches in all competitions. The latest failure was the toughest of them, a 1-6 home defeat to RB Leipzig last weekend.

Korkut’s men have thus conceded two or more goals in four of the previous five matches. They should not have too much to hope for ahead of the clash against the in-form Freiburg side who are still dreaming of a place in the UEFA Champions League next season.

Freiburg currently share the fourth position in the table with the likes of RB Leipzig and Hoffenheim.

They have managed a 1-2 victory away at Augsburg last weekend and have a nice opportunity to back it up in front of the home fans against out-of-form Hertha Berlin here.

Christian Streich’s men have scored at least two goals in three of the last four home outings in the league and they should have plenty of room to deliver the goods once again on Saturday against Hertha.

There is a lot to like about the home win pick at the 1.61 odds here. Freiburg are highly motivated with a realistic go at the top-six finish at the end of the season (still in contention for the top-four finish, though), while Hertha Berlin have just suffered a 1-6 defeat last weekend at home to RB Leipzig.

Since Hertha have been very easy to break down of late, we will also back the hosts to net at least two goals on Saturday at the 1.66 odds.