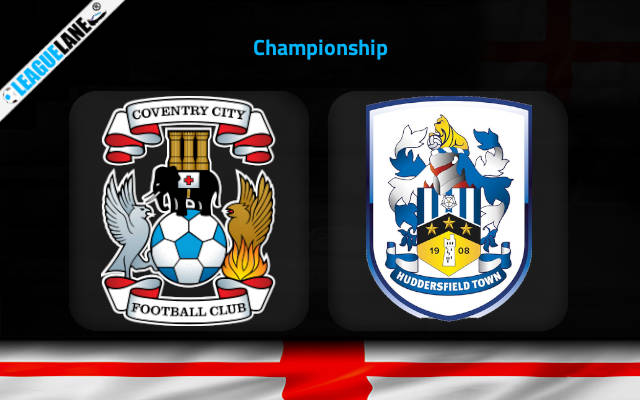 Coventry vs Huddersfield Predictions and Free Tips from our expert tipsters when the teams go head-to-head in the England Championship on Saturday, 28 January 2023.

Neither Coventry nor Huddersfield is having a decent form since the beginning of this campaign. They both are positioned outside the top half in the standings.

Going on, Coventry is on a five-game winless streak in the league and have dropped into 15th position, seven positions and 9 points clear from their Saturday’s counterparts and relegation battlers, Huddersfield.

They have locked horns just four times. Huddersfield were unbeaten in all the four matches.

It is worth noting that three of them were draws. Both teams to score option landed in the previous three encounters between these two.

Who will win the match between Coventry vs Huddersfield?

The home form of Coventry is decent enough. They were unbeaten in seven of the last eight home matches.

Meanwhile, Huddersfield are having an inconsistent form on the road lately. They were winless in eight of the last 10 away matches.

For the above reasons, we are expecting a win for Coventry despite of the unbeaten h2h from of Huddersfield.

Three of the last four home matches of Coventry and four of the last six away matches of Huddersfield had goals under 2.5 ft. Moreover, their h2h matches have generally been low-scoring affairs. Thus, we expect this match to have under 2.5 goals ft.

The h2h recordings suggests a both teams scoring scenario here. But we don’t expect goals from both ends considering Coventry’s decent defensive performance at home of late.

In addition, Huddersfield have failed to score in three of the past six road trips. Therefore, we quite don’t see the value of backing both teams to score bet here.

Coventry have been successful in maintaining their impressive home form since the beginning of this season. The advantage of having the home turf will boost them with spirits here.

For the main betting option, we like to place Coventry to win at 1.75 odds. Under 2.5 goals at 1.83 odds seems to be a decent alternative considering the recent goal trend of both teams.