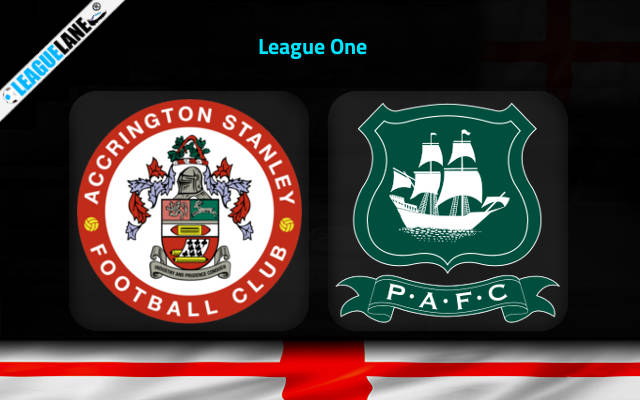 Plymouth survived relegation by 5 points last season in their first campaign back up in League One. With more than one-third of the games played this season they find themselves as favourites to get promoted to the Championship.

They will travel to the Crown Ground as they face Accrington this Saturday. Read our Preview, Predictions, and Betting Tips with Analysis here.

Accrington vs Plymouth Prediction and Analysis

The hosts are looking like they are headed for, yet another mid-table finish this season. The team had a terrible month of September where they won just a game, but they have since recovered and are currently undefeated in 4 games.

The team seems to score quite a few goals but have conceded way too many goals especially for a team in the top half of the league. They are currently 12th in the table with 21 points coming through 5 wins and 6 draws.

The Pilgrims on the other hand has been one of the most entertaining teams to watch this season. They are undefeated in the league since their loss to Rotherham in the opening matchday of the season.

The team has been defensively tidy throughout the season but has dropped points through draws in games where they have not got sufficient goals on the board. The team despite not conceding too many goals is not known for keeping clean sheets.

They are 2nd in the league with 9 wins and 6 draws. With 33 points to their name, they are just a point shy of league leaders Wigan.

The hosts have performed fairly well this season particularly in home games, but they will come up against one of the best teams in the division. We are backing the visitors to just about edge past their opponents given their excellent form.

Ryan Hardy who is the team’s top scorer and the league’s 4th highest goal scorer should be the person who helps his team add another 3 points to their tally.