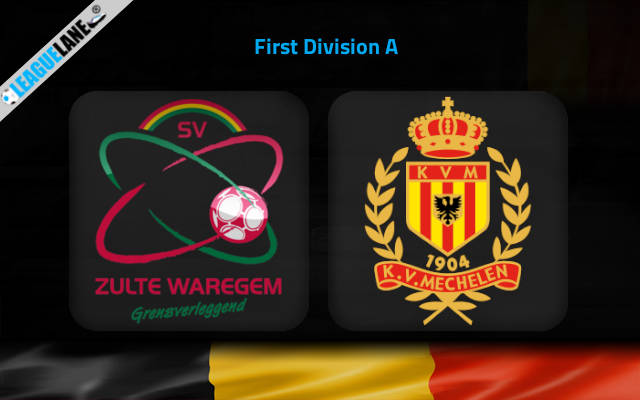 The visitors are in dire need of a win after 3 consecutive losses as they host the visitors at Elindus Arena this weekend.

The visitors is at the 7th spot on the table with 30 points in hand. Of the 19 matches played, they won 9 of them while drawing another 3 games. They lost on 7 fixtures almost the same goals scored to conceded in ratio standing at 33:34.

KV Mechelen have scored only 8 times from the past 6 league meetings with the opposing sides scoring a total of 11. They won the last game against Gent by 4-3 after the previous loss to table toppers Royale Union SG.

The hosts are at the bottom in the relegation group at 17th spot. From the 19 games so far, they have lost on 10 fixtures while drawing on 5 and winning only on 4 occasions. They only have 17 points with the lowest goals to conceding ratio on the table at 27:43.

SV Zulte Waregem have seen their defense breached in 5 of their previous 6 games, shipping 13 goals on the way. They suffered 3 back to back defeats against Anderlecht, Club Brugge and the latest being against Royale Union SG.

KV Mechelen remains undefeated by the Essevee when having played them away from home in the previous 2 league matches while they have not able to win in their past 2 away fixtures.

Previous matches between the two had averaged 3.55 goals while BTTS have happened 64% of the time. Considering the hosts poor home form, the visitors are more likely to win at Elindus Arena even though scoring from both sides can be seen.