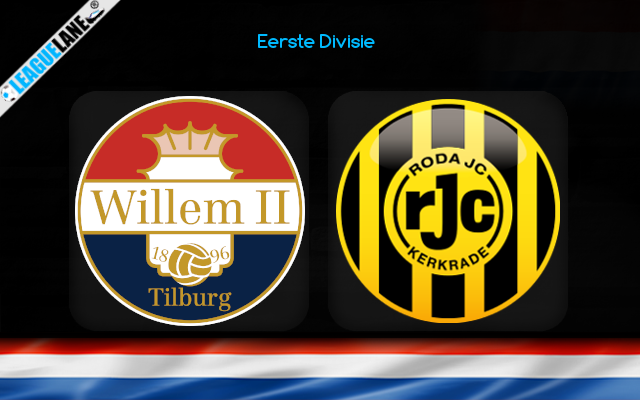 Willem II vs Roda Predictions and Free Tips from our expert tipsters when the teams go head-to-head in the Dutch Eerste Divisie on Friday, 6 January 2022.

Willem II sealed a win against Graafschap on the road in their previous league outing to end a four-game winless streak. They will be hoping to seal more of those to secure their spot inside the safe zone.

Meanwhile, Roda will be wanting a better result here following a 1-3 Eerste Divisie loss in their previous game against Heracles. They have conceded three defeats in the last four outings.

Willem ll is on a three-game unbeaten streak against Roda. The latest meeting had finished in a 1-0 win for Willem ll.

At this venue, the hosts are having an unbeaten run for the last six h2h encounters.

Who will win the match between Willem II vs Roda?

Roda lost four of the last five road trips while Willem ll follows a three-game winless streak at home. However, Willem ll will have a slight edge over Roda when the h2h stats are considered.

Considering all these observations, we expect a result in favor of the hosts Willem ll on Saturday.

There is nothing wrong in expecting an high-scoring affair here. Because both these sides are having a weak defensive side.

On top of that six of the last eight h2h matches between these two sides at this venue had goals over 2.5 ft. Thus, expect an over 2.5 goals affair here.

Roda have managed to score a total of 6 goals over the course of the last six road trips. They will definitely find enough of chances against this Willem ll defense which was breached seven times in the last four home matches.

Both teams to score option is likely to land in this match and backing it at 1.62 odds seems ideal enough.