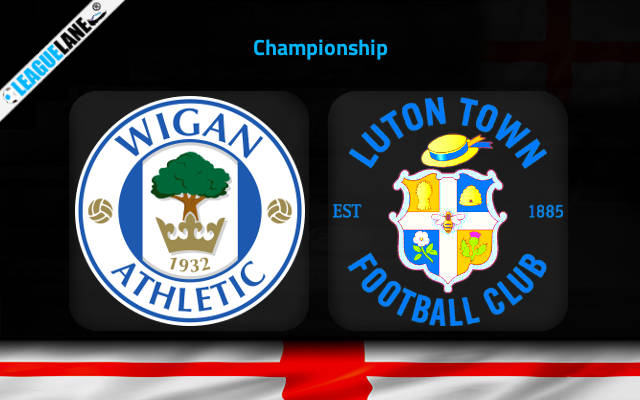 Wigan vs Luton Predictions and Free Tips from our expert tipsters when the teams go head-to-head in Championship on Saturday, 21 January 2023.

Wigan’s three-game winning streak finally ended, when they lost to West Brom by 3-2. They knocked out Wigan in the FA Cup match recently. Now they will aim for a similar result as both teams will play in a league fixture.

Meanwhile, Will Keane scored in the added time as Wigan managed to hold Cardiff to a 1-1 draw. New manager Kolo Touré has a lot of work to do as his team are most likely to be relegated as they are at the bottom of the table.

It is interesting to note that the last time Wigan won this game at this ground was more than two decades ago.

Both teams played against each other in the FA Cup recently and the visitors won that game by 2-1. Another point to note is that, Luton are unbeaten in five of the last six head-to-head matches against this opposition.

Who will win the match between Wigan and Luton?

The visitors will most likely take all three points from this game. Manager Rob Edwards clearly knows that they will be playing against a relegation team. Moreover, they managed to knock Wigan out of the FA Cup last time.

The last four consecutive home matches have ended in a loss for Wigan. They are at the bottom of the table and have an abysmal form against Luton at DW Stadium. Do note that the visitors won the FA Cup match against this team a few days back. Therefore, our first tip is that Luton will win this game– at 2.60 odd.

Moving on, our second tip for this game is that Elijah Adebayo will score anytime– the odd for this tip will be at 3.60. He is on a two-game goal-scoring streak. Also, he scored the winning goal against Wigan in the FA Cup match last time.