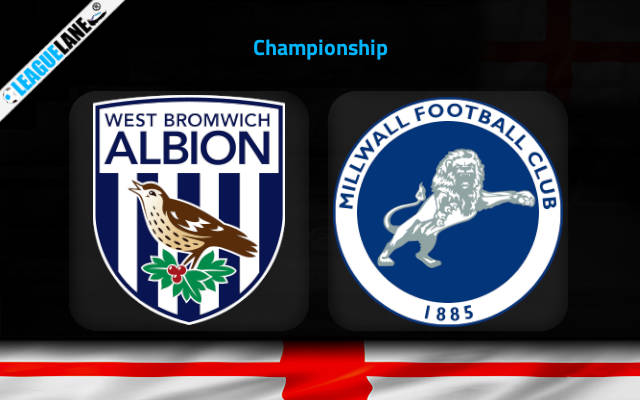 The Baggies wasted no time in announcing themselves as hot favourites for promotion by winning 4 of the five games played so far.

This includes a streak of 4 wins on the trot since the 2-2 away draw at Bournemouth on matchday 1.

Valerien Ismael’s men were lethal in the attacking front, bagging as many as 12 goals. At the same time, the 1-0 win at Peterborough is their second win of the campaign without conceding a goal.

Millwal on the other hand had it tough at the start of this season and it took them until matchday 5 to register the first win of the season.

It was at home against the newly promoted Blackpool and the opponents were reduced to 10-men.

The Lions lost 2 of the previous since starting the campaign on back-to-back draws. They are 17th in the table with 5 points and are braced for a tough test this Saturday afternoon.

Without a doubt, West Brom is the team to back here with their players quickly adjusting to Valerien Ismael’s attacking philosophy.

At the same time, Millwall cannot be underestimated as they have the habit of making life difficult for inform teams in the previous campaigns and therefore expect a closely fought battle at the Hawthorns this weekend.

With all 5 league games of Millwall seeing BTTS and West Brom ever likely to concede at some point with their attacking play, both teams to score come in hand as the best alternative for this fixture.