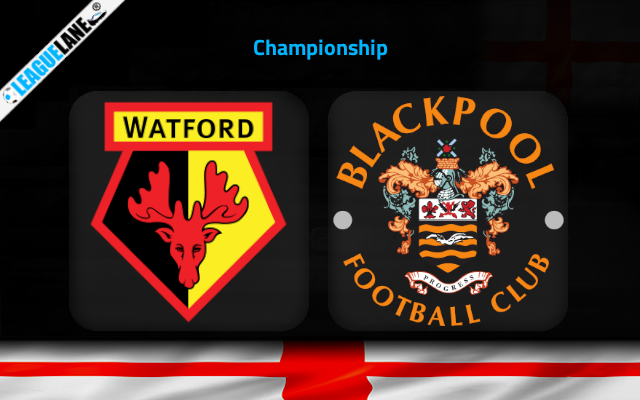 Watford vs Blackpool Predictions and Free Tips from our expert tipsters when the teams go head-to-head in the England Championship on Saturday, 14 January 2023.

Watford have been delivering impressive displays consistently since the beginning of this season. They were on a two-game losing streak before sealing a victory over Norwich. Hence, they will be hoping to maintain it by sealing victories further.

Meanwhile, Blackpool has not been able to pull up any trees since the beginning of this season. Its on rare occasion that they have won a game in this campaign. As a result, they are dropped into third from the bottom of the table.

Watford won three of the last four clashes against Blackpool. The reverse fixture had finished in a 3-1 win for Blackpool.

At this venue, Watford is on a two-game winning streak against Blackpool. They have netted in a total of 11 goals during the course of those two games.

Who will win the match between Watford vs Blackpool?

We are counting on Watford as they looks way better than Blackpool at the moment. Do also note that Blackpool follows a four-game winless streak on the road.

Since Watford won three of the last five home outings, we expect a win for Watford.

Around 60% of the matches played by these two teams had goals under 2.5 ft. Moreover, four of the last five games played by Watford were low-scoring affairs.

However, we expect Watford to score two or more goals as they have been scoring goals at a good rate against Blackpool. In that case, we expect this match to have over 2.5 goals.

Watford’s defensive line is not that strong to be honest. Especially for a team which sits inside the top 5, such a defensive side is surely a let down.

Anyways, they have bagged a clean sheet in three of the past four home outings. So it’s a tight call to predict whether both teams score here.

Watford is at the fourth position and are definitely in a state where they cannot afford defeats. A couple of defeats have affected them lately too. However, we expect a win for them for all the above reasons.

We therefore like to place Watford to win at 1.73 odds as the main betting option here. For the second tip, we like to place the over 2.5 goals bet at 1.85 odds considering the goal-scoring form of Watford against Blackpool.