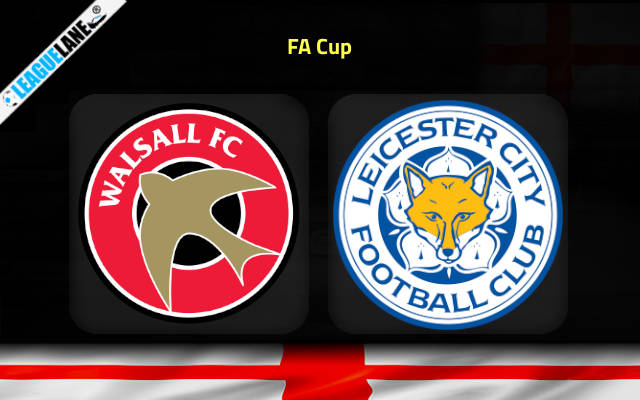 Walsall vs Leicester Predictions and Free Tips from our expert tipsters when the teams go head-to-head in English FA Cup on Saturday, 28 January 2023.

Leicester surely have had their problems this season in the PL. But do take into account the fact that they are one of top-rated teams in the country. They are going to be a major challenge for any team from the lower divisions.

And here we have Walsall, who are part of the fourth tier of English Football – the League Two. They are stuck in the mid-table of their league, and most importantly, they have a poor h2h record against this opponent.

The Foxes have a perfect winning record against this opponent in h2h clashes in the past two decades – barring just a single draw. And not only did they score two or more goals in every single one of these games, but they scored four or more in all but two of these meetings.

Who will win the match between Walsall and Leicester?

The Foxes are former champions of the English top flight, and are still considered to be one of the best in the PL. They are yet to hit top gear this season – but this upcoming encounter is an opportunity for the team.

They are in desperate need for a confidence-boosting win, and Walsall from the fourth tier will be a perfect candidate for that. On top of that the Foxes have a near-perfect h2h record against them as well.

Count on a Leicester victory this Saturday.

The Foxes scored two or more goals in 100% of h2h clashes so far, and found the back of the net four or more times in all but two of their encounters.

On top of that, Walsall have a single clean sheet to their name from their past eight fixtures.

It surely looks as if goals are coming in plenty this weekend.

In spite of all their issues, Leicester kept clean sheets in 100% of their games against teams from lower divisions in the EFL Cup and the FA Cup this season. They are determined to deliver a momentum-building win this weekend, and will give no chance at all to the hosts.

Chances are quite low for Walsall to find the back of the net this Saturday.

The Foxes have a 100% winning record in h2h clashes in the last two decades, barring a single draw. They are former champions of the English top flight, while their counterparts are stuck in the midtable of the fourth tier of English football.

Moreover, the Foxes delivered phenomenal results in all of their fixtures this season against teams from lower divisions.

It appears that a -1.5 Asian Handicap on Leicester at an odd of 2.00 will be a great pick for the day.

In addition, Walsall registered a single clean sheet from their past eight fixtures, and they have just two clean sheets at home in the past five months.

As such, the possibility of this encounter turning into a high-scoring affair is very high. The odds for Over 2.5 Match Goals are placed at an attractive 1.75.