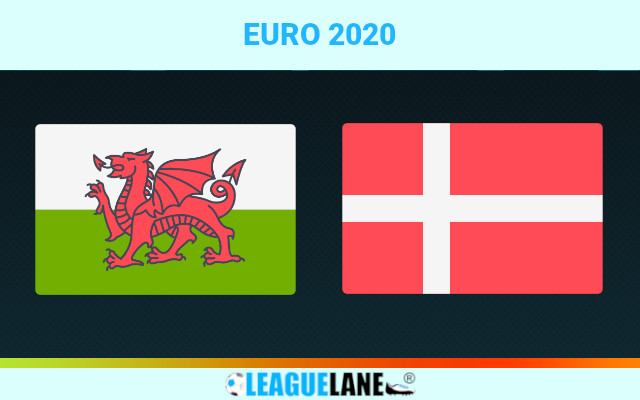 Denmark and Wales lock horns in the first round of 16 fixture of the Euro 2020 at the Johan Cruijff Arena in Amsterdam, Netherlands.

Wales qualified from Group A as runner up after losing 0-1 to Italy in their final group game, while Denmark trounced Russia 4-1 in a must win game at Copenhagen.

The second spot in group is nothing less than deserved for Wales after holding Switzerland to a draw and trouncing Turkey 2-0. Having bagged 4 points from their first two games, they needed a draw or defeat by slimmest of the margin to qualify directly to the knockouts and they achieved exactly the same against Italy, though luck played in part.

The Italians had several chances to score, goalkeeper Danny Ward was the busiest Wales player on the pitch. But Mancini’s fully rotated squad failed to convert those chances.

Bale and co had a few half-chances on their own, in the end Matteo Pessina’s first half goal was the difference between the teams.

Wales have now qualified for the round of 16 for a second consecutive time at the Euro. In 2016, they topped the group above England with 2 wins. This time, they beat Switzerland on goal-difference, the team they drew 1-1 on matchday 1.

Denmark needed a big win against Russia to stand any chance of progressing to the knockouts as they started the match sitting at bottom of the group with defeats to Finland and Belgium. We saw an inspired performance from the Danes in front of some 26,000 fans at Copenhagen and the 4-1 win is nothing less than deserved.

Note that, they had some dubious calls from referee in the match, Fedor Kudryashov could have been sent off for a second bookable offense in the 65th minute, while the 69th minute penalty for Russia was nothing more than a gift that pulled the game to 2-1.

This is only the second time that Denmark qualifies from group stage since they won the Euro in 1992.

Ethan Ampadu will miss this match through suspension after receiving direct red card against Italy.

Rob Page has no other players missing and he could revert to the 4-2-3-1 formation bringing Kiefer Moore to operate as the lone striker.

Kasper Hjulmand has been consistent with his team selection throughout the tournament and we expect no changes to the eleven that started in the 4-1 drubbing of Russia.

He has flexible players in the eleven who could switch the formation between 3-4-3, 4-3-3 and 5-4-1 during the match. Good reason to start with three center backs and the full-backs Daniel Wass and Joakim Maehle as wide midfielders.

There has been a total of 9 head-to-head meetings between Wales and Denmark and not one game ended in a draw. The Danes tasted victories on 5 occasions while Wales are not far behind with 4.

They last met during 2018 UEFA Nations League and the pair of fixtures went in favour of Denmark, 2-0 at Aarhus and 2-1 at Cardiff.

In 2016, Wales surprised everyone by reaching the semifinals and one of the teams they eliminated was tournament favourites Belgium (1-3) in the quarter final. The team have moved a few spots in FIFA rankings since, now sitting at 17 and rarely met a quality side since 2020.

Wins against Turkey and Czech Republic are decent results, but they seem to flatter while coming against bigger teams like England, Belgium, Italy and France, the only teams who are inside top 10, and they lost in all those games.

Denmark had an excellent run leading to the tournament, and this come to an end with Eriksen incident on matchday 1 against Finland.

Belgium is the only other team that defeated them since the start of 2020, though they made it to 3 on the bounce of matchday 2. The period also saw a win and draw against England in the Nations League and wins to nil against Austria and Sweden. They also held Germany to a draw in the friendly just before the tournament.

It seems like the Danes have finally found their old form with the morale boosting win against Russia. I am not underestimating Wales and surprises happen in football, but the picks must be selected on the basis of form.

RB Leipzig’s Yussuf Poulson is the senior striker in Danish squad and he is my anytime goal-scorer pick having scored in consecutive games against Belgium and Russia.