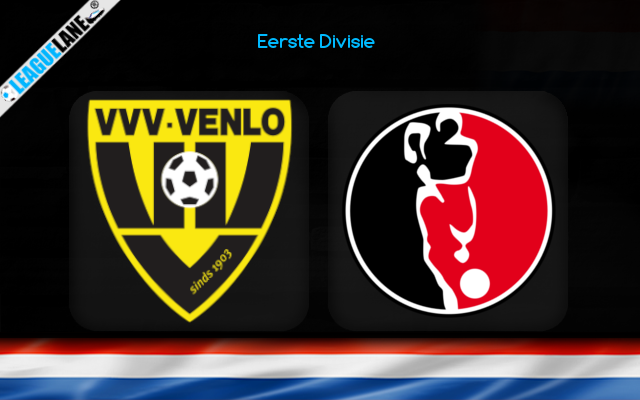 VVV-Venlo vs Helmond Sport Predictions and Free Tips from our expert tipsters when the teams go head-to-head in the Dutch Eerste Divisie on Friday, 6 January 2022.

VVV-Venlo will be hoping for a victory following a 0-2 win over FC Eindhoven in the previous fixture. They are on a five-fixture unbeaten streak at the moment.

Meanwhile, Helmond Sport have managed to end their two-game losing streak by sealing a 1-0 win over Den Bosch in the previous league fixture. They are 13 points away from their Saturday’s counterparts VVV-Venlo.

VVV-Venlo can also rely on the recent tradition since they won the previous three encounters against Helmond Sport. The latest encounter had finished in a 0-3 win for Venlo.

At this venue, Venlo are having a 14-game unbeaten streak against Helmond and are on a separate five-fixture winning streak at the moment.

Who will win the match between VVV-Venlo vs Helmond Sport?

VVV-Venlo are on a two-game unbeaten streak at home. Meanwhile, Helmond lost three of the last four road trips.

On top of that Venlo is having an exceptional head to head form against Helmond. Therefore, expect a win for Venlo on Saturday.

The recent goal trend of these two suggests a low-scoring scenario at Covebo Stadion – de Koel on Saturday. Moreover, four of the last six home outings of Venlo had fewer than 2.5 goals ft.

Since Helmond have recorded four of such under 2.5 goals affair in the last six road trips, expect this match to have fewer than 2.5 goals ft.

Three of the last four league outings of Venlo saw their defensive side succeeding in preventing goals from the opposite side. On top of that the past two h2h wins sealed by Venlo at this stadium were clean sheets. Thus, expect an under 2.5 goals ft scenario here.

This match is a great chance for the hosts to maintain their current thread of unbeaten games further.