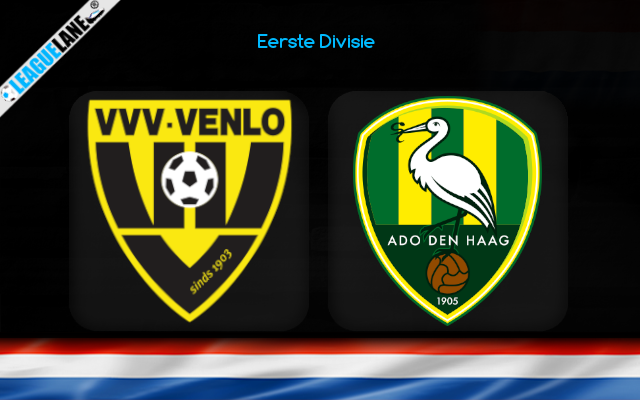 VVV-Venlo vs ADO Den Haag Predictions and Free Tips from our expert tipsters when the teams go head-to-head in the Dutch Eerste Divisie on Friday, 27 January 2023.

ADO Den Haag will be wanting a better result here following a score draw against Jong Utrecht in the previous outing. However, they are currently on a four-game unbeaten streak in the league.

They won’t be having an easy match-up on Friday as they faces VVV-Venlo who is currently inside the safe zone. Moreover, Venlo was unbeaten in seven of the past eight league fixtures.

The past four overall wins were evenly split, with two each for both sides. Venlo won the reverse fixture, beating Den Haag 2-3 ft.

Seven of the last 10 encounters at this stadium had goals in plenty. Both teams to score option have also been landing often in the recent tradition.

Who will win the match between VVV-Venlo vs ADO Den Haag?

The current form of VVV-Venlo at home isn’t that impressive. They are on a three-game unbeaten streak at home, but two of those were draws.

However, ADO Den Haag is also having an inconsistent form on the road. They were winless in three of the past four road trips.

Venlo looks comparatively better and we are expecting a result in favor of them on Friday at Covebo Stadion – De Koel.

The attacking side of both the teams have been consistent in scoring lately. Moreover, matches involving these two have generally been high-scoring.

Knowing that their recent h2h matches at this venue were mostly high-scoring, we have enough of reasons to expect goals over 2.5 ft.

The defensive side of both these teams are so weak and doesn’t seem capable of bagging a clean sheet from this fixture. Since we saw them both scoring in the recent h2h matches they met at this stadium, expect goals from both ends.

We expect a highly competitive affair between these two on Friday. And selecting a clear winner from these two is a tough task. Anyway, Venlo seems to have a slight edge for all the above mentioned reasons.

We therefore like to place a draw no bet option in favor of Venlo at 1.66 odds as the main bet. For the second tip, we like to place the over 2.5 goals bet at 1.67 odds.