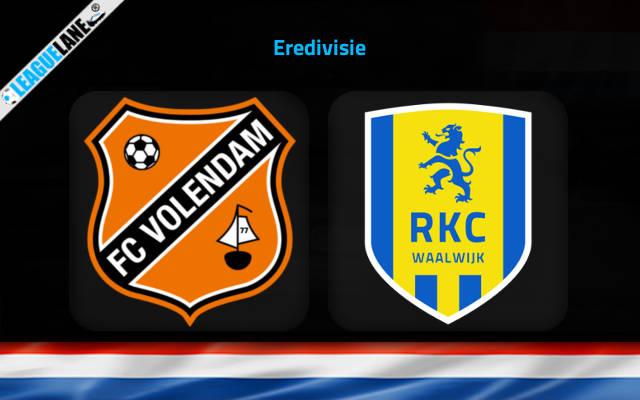 Volendam vs RKC Waalwijk Predictions and Free Tips from our expert tipsters when the teams go head-to-head in Eredivisie on Saturday, 14 January 2023.

Volendam are one of the absolute worst teams in the whole league, and are placed 17th in a table of 18. They conceded the most number of goals in the whole competition, and have a 100% losing record at home, barring a single fixture.

Meanwhile, Waalwijk are placed in the mid-table at the moment, and will be eager to make use of this upcoming match-up. They are level on points with the 10th placed Go Ahead Eagles, who have a tough fixture coming up. The team will view this as a chance to break into the top half of the table.

Goals have come in plenty whenever these teams locked horns in the past. In fact, the latest clash ended in a 3-3 draw, and five of the former seven meetings had goals from either side of the pitch.

Do also note that three of the former five clashes had four or more goals.

Who will win the match between Volendam and RKC Waalwijk?

Waalwijk have a real chance to deliver a confidence-boosting win. Volendam have a 100% losing record in the league going back to October, barring a clash against the dead-last placed Cambuur.

The hosts have also been extremely poor as far as their defense is concerned. They let in 16 goals from their last five home games combined.

To put it straight – both teams are struggling with their defense. Volendam conceded the most number of goals of all the teams in the competition, while their counterparts let in 11 goals from their previous three away fixtures combined.

Will Both Teams score in the match?

As mentioned before, either team is currently finding it hard to keep clean sheets. They are conceding goals in plenty, and this same trend can be seen in past h2h meetings too. And after all, the latest h2h match-up between the two ended in a 3-3 draw.

It is quite logical to expect a high-scoring affair between the two.

Waalwijk have the edge here due to their comparatively better form in recent fixtures. In fact, while they are gunning for a position in the mid-table, Volendam are possibly the worst team in the entire competition.

They are on a long losing streak, and have been a catastrophic failure even at home. As such, Waalwijk to Win at an odd of 2.40 is a great pick.

Now coming to goals, both teams are struggling with their defense, and are desperate for a win this Saturday. This is kind of the perfect recipe for a goal-fest. Moreover, h2h meetings over the years have also shown this same trend.