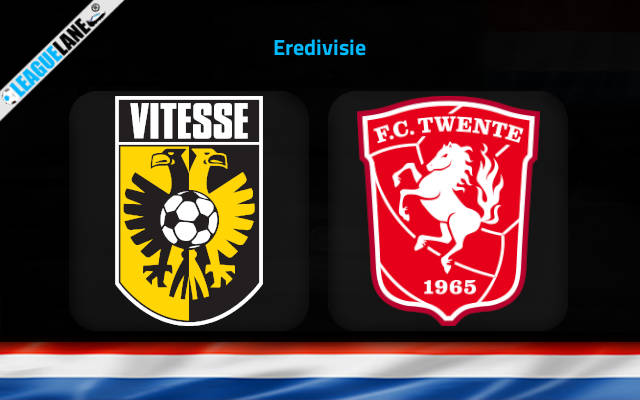 Vitesse vs Twente Predictions and Free Tips from our expert tipsters when the teams go head-to-head in Dutch Eredivisie on Wednesday, 25 January 2023.

Twente have been in the race for a podium finish right from the start of the season, and have been admirably consistent. However, their would dearly love to recreate their form at home, in away fixtures.

Meanwhile, it has been some time since Vitesse last registered a win. As a matter of fact, their latest victory came back in October, and all through this season they registered just three wins in total.

The latest encounter ended in a 3-0 win for Twente, and they are also on a three-game winning streak against this rival. Moreover, they have a perfect winning record at this stadium in the last three years, and have a combined scorecard of 1-6 from the past two clashes here.

Who will win the match between Vitesse and Twente?

Twente have a dominant h2h record against this opponent, and are also one of the favorites to register a podium finish this Wednesday. They are in great form, and have a 100% winning record after the World Cup break – barring a draw against Ajax.

On the other hand, Vitesse managed to win just thrice since May of 2022, and scored a grand total of one goal after the World Cup break. Surely expect guests Twente to have a massive upper hand this game week.

Twente scored two or more goals in all but one of their game after the World Cup – and the sole fixture where they failed to do so was against titans Ajax. Most importantly, they scored three or more goals in the last three straight h2h meetings.

It appears that we are about to witness a high-scoring affair.

Likely, the chances of Vitesse finding the back of the net this Wednesday is quite low, against the in-form Twente.

Twente are one of the best in the Dutch top flight, and are going after a top-three finish. They have been in great form all through the campaign – and particularly so after the World Cup break. In fact, they have a 100% winning record since the season resumed.

On top of that, they have a great h2h record too. They have a combined scorecard of 10-1 from the past three h2h meetings, and they also have a 100% winning record in h2h clashes in the past two years.

On the other hand, Vitesse have just three wins to their name in the last nine months.

As such, Twente to Win at an odd of 2.00 is a great tip this Wednesday.

They also scored two or more goals in all of their fixtures this season after the World Cup break, while Vitesse have a single clean sheet at home since May of 2022.

By the looks of things, the Over 1.5 Team Goals by Twente would be a good second choice here at an odd of 1.90.