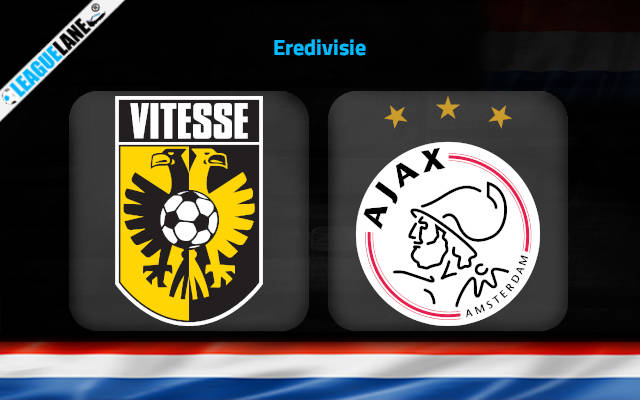 Ajax is just one game away from taking the Eredivisie title. They will be visiting Vitesse this Sunday for the last game of the season at GelreDome.

Ajax is at top flight in Eredivisie with 82 points from 33 games. They won 26 times in the league while drawing on 4 and losing only thrice. They have been already confirmed as Champions and have also earned a UCL spot next season. The visitors have the best attacking force this season, netting 96 goals in total.

Ajax head into the encounter after a 5-0 Eredivisie win with the defeat of Heerenveen in their last match. Over the course of their last 6 outings, they have helped themselves to a total of 14 goals while having have also not failed to score on each one of those occasions.

On the other hand, Vitesse resides at the 6th position on the table with 50 points. Of the 33 matches played, they won 15 times in the league while drawing on 5 and losing on 13 other occasions. They have already qualified for Conference League Play Offs and at this point, they have nothing to fight for.

Vitesse, following on from their previous result, will be hoping for more of the same after the 1-2 league victory against Fortuna Sittard. Things have not been going that well in front of goal for the hosts recently, with the side failing to score in 2 of the last 5 games.

Ajax remain undefeated to this rival since their previous 9 h2hs of which they secured 8 wins. Considering 16 away games played so far, they lost only once this season.

It’s likely that the visitors will score today, as they have netted in the last 20 games coming into this one and have scored 13 goals in the last 5 games.

By the looks of things, expect a victory for toppers Ajax this Sunday.