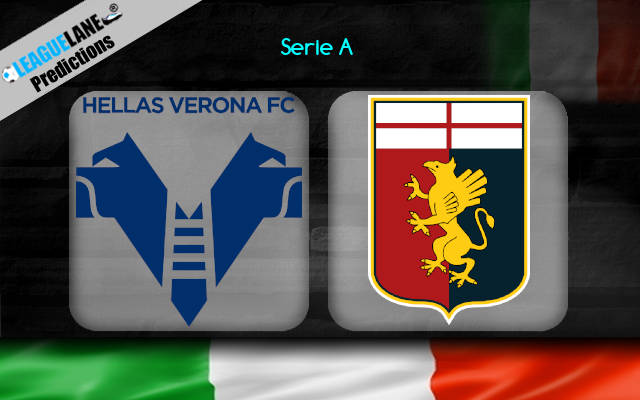 Round four of Italian Serie A will be wrapped up on Monday night at Marc’Antonio Bentegodi.

Hellas Verona welcomes Genoa, team that got severed by injuries and covid-19 infected players that had direct impact on results so far.

Hosts have collected six points so far (they got three for free against AS Roma), sitting in solid 7th place, all of them won at this stadium while losing the only away day to Parma. They are warm favorites to win this upcoming clash, currently priced at 1.95 odds.

Let’s take a look at some head to head stats and forms.

The last three h2h encounters between these opponents were always won by the hosts. Genoa dismantled Verona at Luigi Ferraris in the most recent one 3-0, while losing at this pitch in the previous year 1-2 FT.

Overall, there were 23 matches total and Genoa have 9-6 lead in terms of victories. Their stats at Bentegodi are horrible though – one win, five draws and five losses.

Four out of the last five times they locked horns we had either BTTS or Over 2.5 goals pick land.

Hellas Verona’s football philosophy hasn’t changed much in comparison to the previous season.

Croatian coach Ivan Juric prefers solid defending over risky offensive formations. All three Verona’s games so far ended Under 1.5 FT. The only goal scorer in this season so far was Andrea Favilli in the second round against Udinese (1-0 win).

Fans are expecting to see more of Nikola Kalinic who arrived from Roma. Good news is form of Serbian winger Darko Lazovic who played a great role in Serbia’s win against Norway in EURO playoffs.

Unlike the majority of Serie A teams, Genoa have played only two games so far. Their season (when everyone was healthy) started with convincing 4-1 win against Crotone. The second appearance was a disaster though, losing to Napoli 0-6.

We believe hosts will take advantage of Genoa’s poor form and possibly a lot of absent players and take all three points on Monday.