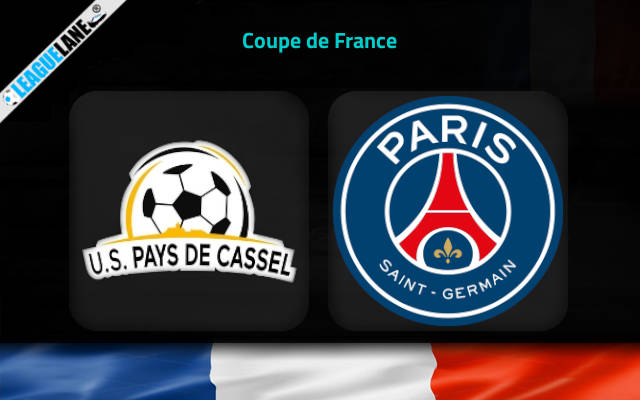 US Pays de Cassel vs PSG Predictions and Free Tips from our expert tipsters when the teams go head-to-head in Coupe de France on Monday, 23 January 2023.

Pays de Cassel defeated Wasquehal on penalties to advance to the Round of 32 in Coupe de France. Now they will play against PSG who are arguably the best team in Ligue 1 this season.

PSG qualified for this round after defeating Chateauroux by 3-1. They won that game comfortably without the iconic trio of Messi, Neymar and Kylian Mbappe being in the starting XI. Manager Christophe Galtier’s objective is to win this trophy this season.

This is going to be the first time both teams will play against each other. The host have performed well in this competition since October.

Another point to note is that PSG have won three of their last four outings away from home. They recently played in a friendly game against Al-Hilal & Al-Nassr Stars at Saudi Arabia.

Who will win the match between US Pays de Cassel and PSG?

The visitors will most likely advance to the next round of this competition. The host will face a difficult time as they will be playing against arguably the best football club in France. We can expect Manager Christophe Galtier to give chance to substitute players for this game.

In this competition, the host have won the last three rounds by scoring two goals. Against Chateauroux, the visitors scored three goals. We can expect PSG to win this game by a huge margin.

It is important to note that the Pays de Cassel plays in the Regional Hauts-de-France league. Which is the sixth-tier league in France. In the previous round, PSG scored three goals against Chateauroux. We can expect a goal-fest as PSG have all the qualities. Therefore, our first tip is that PSG will score over 4.5 goals – at 1.76 odd.

Our second tip is that Both teams to score– the odd for this tip will be at 2.25. Only two teams from the Regional Hauts-de-France league are playing in this competition and both teams have scored plenty of goals till now.