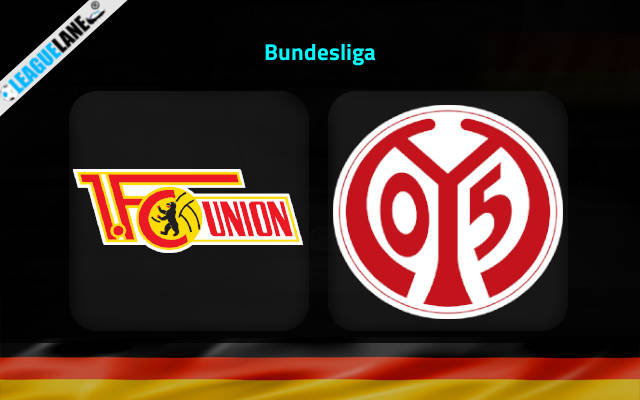 Union Berlin vs Mainz Predictions and Free Tips from our expert tipsters when the teams go head-to-head in German Bundesliga on Saturday, 4 February 2023.

Union Berlin are currently placed second in the table, trailing a single point below the struggling Bayern. This is a great opportunity for the team to climb to the top of the table.

Meanwhile, Mainz are going through a worrying stretch of performances. They have a single league win to their name in the past four months.

Union Berlin recorded wins in three of the past five clashes. In fact, such has been their dominance that they lost just once in the last twenty years.

They also have a 100% winning record at this venue in the last three years – scoring three or more goals in every single one of these fixtures.

Who will win the match between Union Berlin and Mainz?

Union Berlin are one of the only two teams in the league to have won 100% of their fixtures in the last three game weeks. They also have an unbeaten record at home this season – and barring two draws, this becomes a 100% winning record.

Moreover, they have a 100% winning record in h2h clashes at this venue in the last three years.

In the meantime, Mainz recorded a sole win in the Bundesliga in the last four months, and this only victory came against the relegation-threatened Bochum.

It appears that Union Berlin are about to deliver a winning performance.

Meanwhile, it has been more than three months since Mainz kept a clean sheet on the road in a league game, and they also let in two or more goals in three of the past five h2h meetings.

As such, anticipate a high-scoring affair this weekend.

Only twice did Union Berlin kept clean sheets at home this league season, and the latest of those came more than three months back. On the other hand, only once did Mainz fail to find the back of the net on the road in the 2022-23 edition of the Bundesliga.

In addition, six of the past nine h2h clashes had goals from both teams.

It stands to reason that goals are expected from either end of the pitch this Saturday.

Along with Dortmund, Union Berlin are the best team in the competition at the moment. They are going after the top-most spot, currently in possession of Bayern Munich.

Going on, the hosts have a near-perfect record at home this campaign. In fact, barring two draws here, they have a 100% winning record. On top of that, they have a dominant h2h record against this rival over the past two decades – and especially so at this venue.

Likely, Union Berlin to Win at an odd of 2.00 looks very promising.

Going on, they scored two or more goals in every single one of their games after the season resumed, and they also did the same at home in all but one of their Bundesliga fixtures.

Moreover, they scored twice or more in three of the past five h2h clashes, while Mainz were able to register just two Bundesliga clean sheets on the road in the past 14 months.