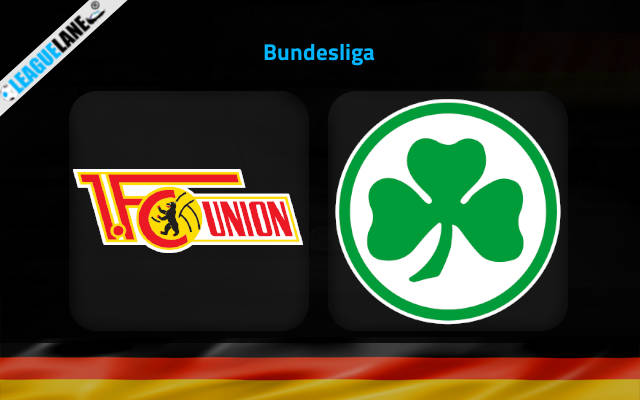 Furth have been the absolute worst team in the German top flight this season, and it’s really no wonder that they have already confirmed their relegation.

They are placed bottom-most in the table, and even with a perfect winning record here on, they will not even be able to improve their standing by one position.

They have won just thrice all through the campaign, and have let in the most number of goals as well. On top of that, they have also remained winless on the road in the entire Bundesliga season too.

Meanwhile, Union Berlin are on a winning streak at the moment, and purely on basis of recent form, only the Bavarians stand ahead of them.

They are currently in possession of the sixth spot, which is the least a team needs to aim for, in order to qualify for Europe. However, they are facing intense competition for the same from the seventh-placed Koln, and they also are determined to give a last-ditch effort for one of the spots above them.

As such, they are gunning for all three points here, and it helps that they have the opportunity to lock horns with the absolute worst of the lot.

Expect a win for Berlin this weekend.

It also needs to be noted that their only two league losses at this venue this season had come against Dortmund, and Bayern.

On the other hand, Furth lost 1-4 at home the past game week, against Leverkusen. They are on a nine-game winless run, and the last they won on the road was in May, in the second division.

Considering these observations, expect a win for Union Berlin this Friday.