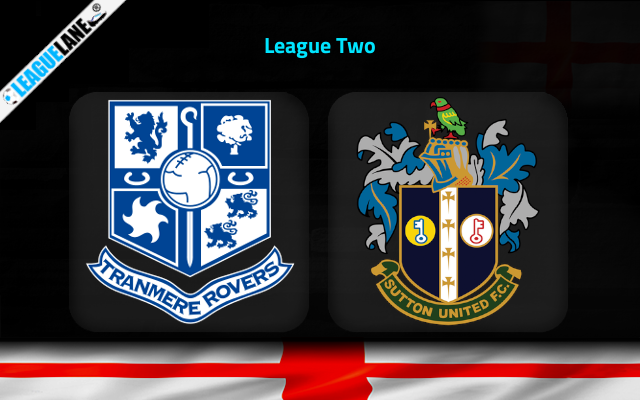 Tranmere vs Sutton United Predictions and Free Tips from our expert tipsters when the teams go head-to-head in the England League Two on Saturday, 07 January 2023.

A couple of victories sealed in the past few league outings helped Tranmere to climb into the 15th position. They are just five points away from safe zone in the league standings.

For the Saturday’s League Two fixture, they will meet an in-form Sutton United. They are sitting at 12th position, one point clear from Tranmere at the moment.

The past two overall wins were evenly split, with two each for each teams. Reverse fixture ended in a 0-2 win for Tranmere.

At this venue, Sutton is on a two-game winning streak against Tranmere. Their h2h encounters at this stadium have often been low-scoring affairs.

Who will win the match between Tranmere vs Sutton United?

Their recent h2h tradition are also in a tally. However, at this stadium Sutton seems to have a decent form. Moreover, they have a three-game winning streak in the league at present. In that case, we expect a result in favor of Sutton.

Only one of the last four road trips of Sutton saw goals in plenty. Tranmere’s home stats also looks similar. On top of that their h2h tradition at this venue mostly had under 2.5 goals. Thus, expect a match with goals under 2.5 here.

We can’t rule out the possibility of a draw here. If this match ends in a draw, it won’t be goalless as neither of these two sides have been solid defensively of late. Therefore, expect goals from both ends of Prenton Park.

The equally competitive stats of these two teams forces us to consider the chances of a draw here. Since Sutton have a slight edge, we expect a draw or a win for them at 1.66 odds. For the second tip, we like to place the both teams to score option at 1.91 odds.