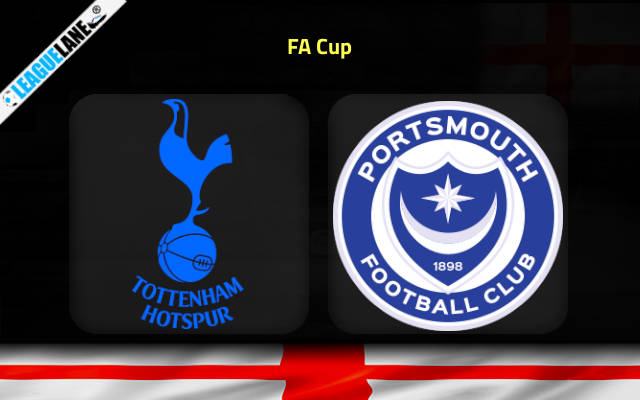 Just three days after a small city derby against Crystal Palace, Tottenham Hotspur will be in action in the third round of the FA Cup.

Antonio Conte’s men play host to League One side Portsmouth in the first game of Saturday’s rich FA Cup schedule.

With such a small turnaround between the two games, we expect the Italian manager to rotate his starting lineup heavily on Saturday, especially knowing that Sours are enormous favorites here either way.

However, we must say that Tottenham’s recent form has by no means been impressive. Conte’s troops conceded two goals in each of the maiden two Premier League outings after the World Cup break.

They have claimed just one point in the process, playing a 2-2 draw at Brentford and falling 0-2 at home to Aston Villa.

Conte has huge problems with injured players as Dejan Kulusevski has recently joined the list in the mentioned loss to the Villains.

Luckily for Spurs and their fans, they are up against an out-of-form League One opposition here. Portsmouth have put their playoffs ambitions in jeopardize after a run of nine successive league matches without a win.

Pompey took no more than two points in the previous five League One outings. They have failed to score in three of these five matches along the way.

Portsmouth have been struggling for goals lately. Tottenham had a short turnaround between their last Premier League game and this FA Cup tie.

We don’t expect a beautiful affair in London but we still have to back Spurs who are enormous favorites. The value is with Tottenham to win & Under 3.5 goals FT bet at the 2.20 odds.