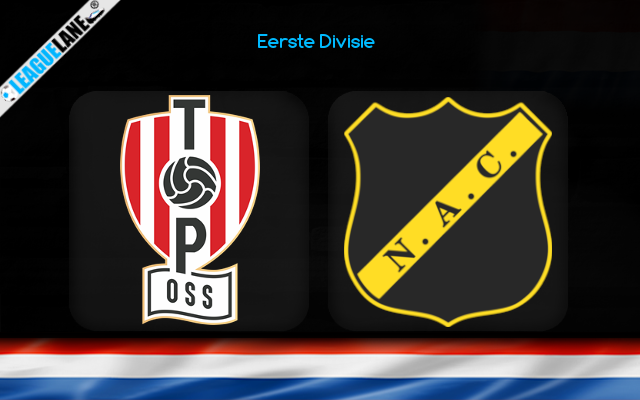 TOP Oss vs NAC Breda Predictions and Free Tips from our expert tipsters when the teams go head-to-head in the Netherlands Eerste Divisie on Friday, 20 January 2023.

NAC Breda have managed to seal a couple of victories in the past four league outings. They are five points away from the safe zone at the moment.

TOP Oss, who sits at the 19th position in league standings, will be their Saturday’s Eerste Divisie rivals. By the looks of things, Breda will have a good chance to decrease the gap to the safe zone.

Breda is having a 100% unbeaten rate against TOP Oss. They are on four-fixture winning streak after sealing a 1-0 victory over TOP Ossin the reverse fixture.

At this venue, Breda won four of the last five meetings. They have netted in a total of 14 goals from those five encounters.

Who will win the match between TOP Oss vs NAC Breda?

Breda is on a two-game unbeaten streak on the road and follows a superior head to head form against this opponent.

TOP Oss, on the other side have lost three of the past four home fixtures. Taking into account all these stats, we expect a victory for Breda on Saturday.

More than 60% of the matches played by these two sides have seen the landing of over 2.5 goals ft. Going on, Breda alone have scored goals at a rate of over 2.5 per game against Oss in the recent history of this match-up. Thus, we expect this match to have goals over 2.5.

The defensive side of both teams have let in a total of 34 goals so far in the season. Such a weak goal preventing line should be able to leak at least one here and we do see the possibility of a both teams scoring scenario here.

TOP Oss has not been able to pull up any trees since the beginning of this season. They have lost much more than they won and drew combined. With Breda as the visiting rivals, we expect Oss to concede another defeat on Saturday.

NAC Breda to win at 2.30 odds is our pick for the main betting tip and for the second, we like to place the both teams to score option at 1.73 odds.