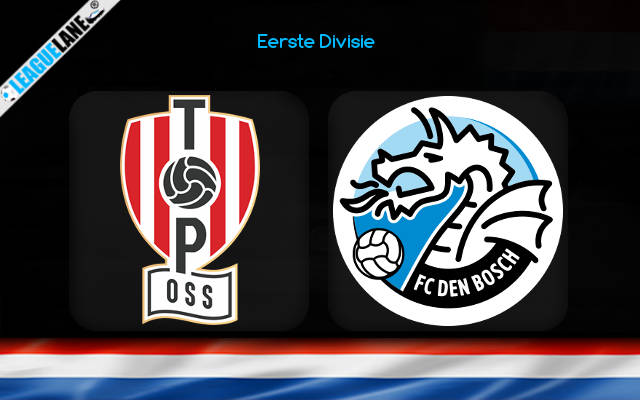 TOP Oss vs Den Bosch Predictions and Free Tips from our expert tipsters when the teams go head-to-head in Dutch Eerste Divisie on Friday, 3 February 2023.

Den Bosch are placed in the bottom half of the table, and it is quite a rarity for them that they get to play a weaker team in the league. But this upcoming encounter is one such opportunity, and they will have to make the most of it.

Oss are placed second to last in the table, and are the only squad in the whole league to have lost the last three games in a row.

The reverse fixture ended in a dominant 4-1 win for Bosch, and this took place just three months back. Do also note that they recorded wins in six of the past eight clashes, and lost just twice at this stadium in the past seven years.

Who will win the match between TOP Oss and Den Bosch?

Den Bosch have a superb h2h record against this opponent, including a 4-1 win this same season. On top of that, Oss are currently placed 19th in a table of 20, and are the only team in the league to have a 100% losing record in the past three game weeks.

As things stand, expect a win for Den Bosch this weekend.

The last h2h clash was a five-goal thriller. Moreover, Oss conceded nine goals from their last three fixtures, and they have a single clean sheet at home in the past six months.

Favorites Den Bosch will be counting on this weak defense quite a lot, and the expectation is that goals will come in plenty this Friday.

Den Bosch might have the tag of the favorites, but do take into account the fact that they failed to keep a clean sheet in their last ten road trips. Moreover, they have a single clean sheet in h2h meetings at this venue in the past ten years.

Chances are high for goals to come from either end of the pitch.

Den Bosch registered a 4-1 win in the latest h2h meeting, and they also won six of the former h2h clashes. They are also on an unbeaten run of two games in the league, whereas counterparts Oss are the only team to have lost the last three league fixtures.

They were also winless in 12 of their past 14 overall games, and are by all means the underdogs this weekend. Likely, Den Bosch to Win at an odd of 2.70 would be the best tip to make this Friday.

Going on though, their defense is not at all performing at a good level recently. In fact, they let in two or more goals in six of their past nine fixtures, and in their past ten road trips in a row.

They also have a single clean sheet at this stadium in the past ten years in h2h clashes.

As such, the Both Teams to Score wager looks very promising at an odd of 1.67.