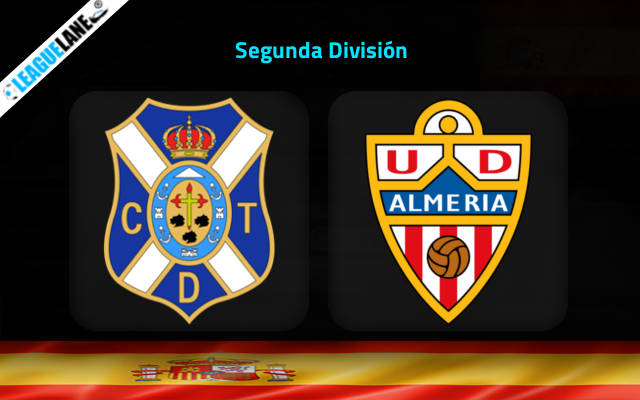 Almeria has been struggling recently with the side is unable to secure a victory since the last 2 games. They however are second in line for the promotion to LaLiga after Eibar. Tenerife won thrice of their last 5 league schedules while losing on twice. In the zone for Play Offs, the hosts seems to slip off guard at home recently. With only 4 points and a place separating the two, they both go h2h at Estadio Heliodoro Rodríguez López in Tenerife this Monday for the 32nd Round of LaLiga 2.

Almeria is at the 2nd spot on the standing with 59 points from 31 games. They won 18 times in the league while drawing on 5 and losing on 8 other occasions. They scored 50 in total while conceding a sum of 28 which shows their effective attacking and defensive sides.

In the game prior to this, UD Almeria drew a thrilling 3-3 in the La Liga 2 tie with CD Lugo. Joan Rubi’s UD men have seen their goal attempts be successful a total of 11 times throughout their most recent 6 matches. The aggregate of goals that have been scored against them during that same period adds up to 7.

On the other hand, Tenerife resides at the 4th position on the table with 55 points. Of the 31 matches played, they won 16 games while drawing on 7 and losing on 8 other occasions.

The hosts had won their last league fixture by 2-1 against Sporting Gijón. Over their preceding 6 games, Luis Ramis’s Tenerife have hit the target a total of 8 times, with that being an average number of goals scored per match of 1.33.

Tenerife have not emerged victorious against Almería in their previous 3 matches in the league. We however predict a win for the home team as they have enjoyed 14 wins in 19 home games at this level of late, and it’s hard to see anything other than a home success in this meeting between high-fliers and strugglers.