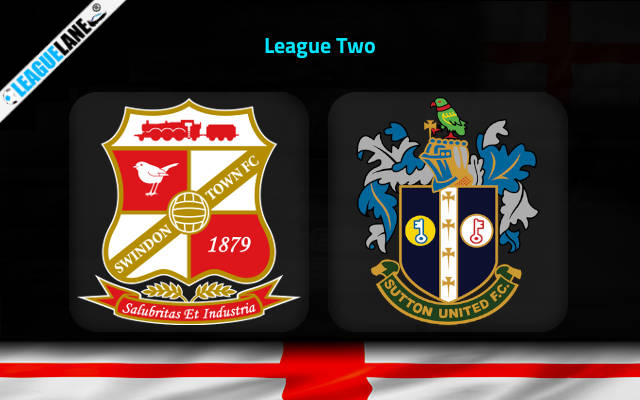 In game week 37 of League Two, Swindon Town faces Sutton United for their next match on Tuesday at Swindon.

Swindon played their last match against Oldham Athletic. Swindon secured a narrow win in the match with their 90’minute from Dion John Conroy. The opposition was goalless at the end of the match. The match ended with 1-0 FT score.

Sutton United played their last match against Walsall. Walsall made sure they scored from the penalty awarded. Sutton couldn’t get penetrate the opposition’s defence after that ending the match in a loss for Sutton with 1-0 FT score.

Swindon’s recent matches have ended with wins and losses one after the other. From the last five matches, the team has won in three and lost in two. Throughout the season, the team has played well in the matches. Their performance has placed the team 6th on the league table with 58 points from their matches.

Sutton United’s loss in the last match has ended the team’s 3-game unbeaten streak. They too have played well in their matches and have lost in their matches occasionally. They are only 1-point shy of the opposition and sit in the 7th position on the league table with 57 points.

Both Swindon and Sutton have performed similarly in their matches. They have played well in their matches throughout the season and only have a 1-point difference from each other. The match will be a tight one and its tide can change at any time.

Swindon has played well in their home matches recently. They have won in three and lost in two of the last five matches. They have kept clean sheets in the winning matches as well. Sutton, on the other hand, has a cold streak of three games going on. The team has won in only one of their last five road trips.

The advantage of playing in their home ground makes it more likely for Swindon to win the match. Both teams have scored in their recent matches and can be expected to do so in this match as well.