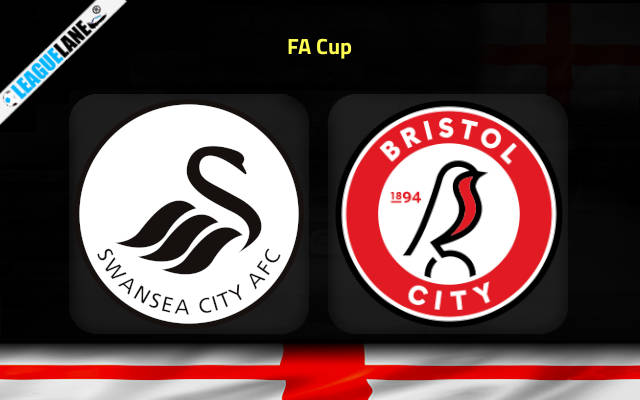 Swansea and Bristol City will lock horns in the FA Cup third round replay on Tuesday evening at Swansea.com Stadium.

The teams played out a 1-1 draw in the first leg played ten days ago at Ashton Gate. It was not an eventful affair we all expected as both outfits seemed too afraid to risk anything after the equalizer.

Both teams, however, reminded much more of themselves on Saturday afternoon, bagging even goals combined in their respective Championship victories over Sunderland and Birmingham.

Swansea have been struggling a lot to break the deadlock at the Stadium of Light despite having an extra man on the pitch since the third minute of the game.

Nevertheless, their best player Joel Piroe eventually made it count in the second half, clearing the path for his team’s 3-1 road victory on the occasion.

The Swans do play attractive football under Scottish manager Russell Martin this season. We have seen at least three goals in each of the last five games they played in the Championship.

We certainly do expect goals here when they come face to face with Bristol City again. The Robins have just notched four goals past Birmingham for a comprehensive victory in front of their fans.

Swansea play attacking football under Martin and Bristol City have just celebrated a 4-2 home win over Birmingham three days ago. There is plenty to like about the high-scoring predictions for this match.

As for the outcome, we do fancy the Swans because of the home court advantage. You can thus back Swansea to win & Over 2.5 goals FT bet at the odds of 3.00. We’ll also take Swansea’s best player Joel Piroe to score anytime at the 2.62 odds.