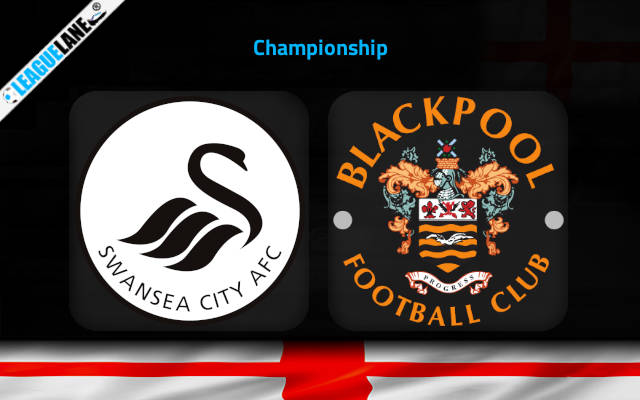 After picking up just a point from their last two home fixtures, Blackpool will be hoping to maintain their good form on the road against Swansea. Neil Critchley’s men have won three and drawn one of their most recent five away league games and won’t be afraid of taking the game as they visit them this weekend.

The Seasiders reside at the 10th spot, having 25 points with over 7 wins and 4 draws of the 17 matches played so far. They were held by 1-1 draw against QPR in the last match.

Russell Martin’s men have suffered a 4-0 defeat to the table toppers; Bournemouth in their last match. They look forward on winning this match as they are undefeated in 87% of their home fixtures.

The visitors have only lost 2 of their 8 away games. Their last 2 back to back games were also an away schedule and came out victorious against Reading and Sheffield.

The 4 h2h matches also saw Blackpool coming out victorious 2 times and drawing another game as well.

Matches involving the home side in recent times have proven entertaining affairs in terms of goals scored, with the last six of Swansea’s Championship fixtures seeing over 2.5 goals scored. Joel Piroe continues to score goals for them and tops at 4th position on the table in terms of netting and is expected to do so the same this weekend.