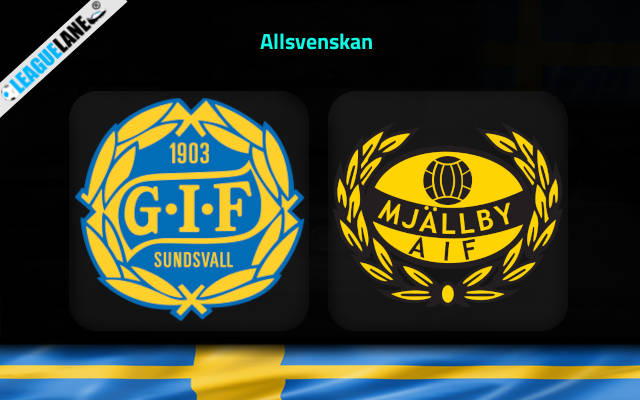 Matchday 9 of Swedish Allsvenskan will raise the curtain between the rock bottomed Sundsvall playing host to Mjallby. Both these sides will go h2h at NP3 Arena this Monday.

Mjallby is at the 6th spot on the standing with 14 points from 8 games. They won 4 times in the league while having drew and lost on 2 games each. The visitors had a strong start to the campaign but have seen a performance dip in their recent schedules. They are more of a defensive team and has the least conceding numbers so far.

In their previous fixture, Mjallby drew 1-1 in the league match with Varnamo. During their six previous matches, Andreas Brännström’s men have converted a total of 6 times, giving them the goals per game average of one. They have scored a relatively modest 9 goals in 8 league fixtures this season.

On the other side, Sundsvall resides at the bottom at 16th position on the table with 3 points. Of the 8 matches played, they won only once while having lost on 7 other fixtures. They are desperate to give fans something to cheer about, and they are likely to go all guns blazing here. The hosts have conceded 22 goals so far and need to strengthen their defense.

Sundsvall made a slow start to the season, with the team suffering their seventh defeat on the process by 1-5 against Norrkoping. That loss was their fourth in a row and they remain as the division’s prime relegation candidates .

Going into this one, Mjallby are without an away win for the past 3 league matches. They will be looking to keep up the momentum against this home side, having lost just once from the last five.

Meanwhile, the newly-promoted Sundsvall have found the step up from the second tier to the Allsvenskan tough to breach after a dismal run of 7 defeats in the last 8. the gave also lost the last 2 home games in a row.

Anyhow a home win should be considered as the rock-bottom hosts have won only once this season.