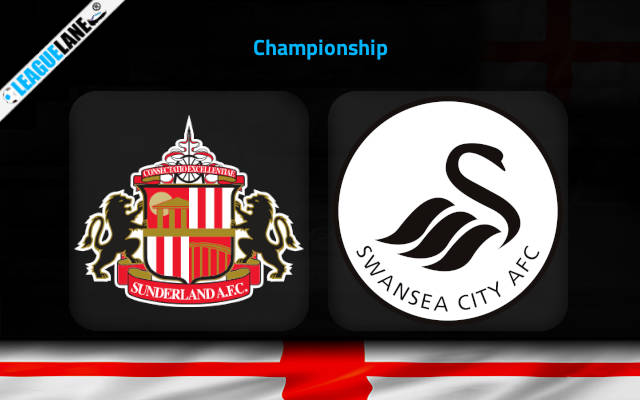 Sunderland vs Swansea Predictions and Free Tips from our expert tipsters when the teams go head-to-head in the England Championship on Saturday, 14 January 2023.

Sunderland are currently one of the most consistent teams in the English second division, and they are rightfully going after a playoff spot. Note that they need a surplus of just four points to climb into the third spot in the table.

Meanwhile, Swansea are in deep trouble. They have a single win in their last five league matches, and their last ever win on the road came back in the first week of October 2022.

Contrary to recent form, Swansea have the better h2h record over the years. They recorded a 1-2 win in the latest encounter, and are also on a three-fixture winning streak. Do also note that they scored two or more goals in the past four h2h games on the trot.

Moreover, they are unbeaten at this ground in such match-ups since 2012.

Who will win the match between Sunderland and Swansea?

Sunderland were unbeaten in eight of their last nine overall fixtures, and they also won three of their past four matches. In fact, since the first week of November, they lost just once in any competition.

On the other hand, Swansea have a single win to their name since October, while they managed to win just thrice on the road this whole season in any competition.

Taking into consideration the recent performances of either team, Sunderland appear to have the edge this weekend.

Sunderland failed to keep a clean sheet in their last six fixtures in a row, while they registered just one clean sheet at this ground since the first week of October. And defensively, Swansea have been a mess all through the campaign.

On top of that, goals have come in plenty in majority of recent h2h meetings too. It appears that we are about to witness a high-scoring affair.

Despite having the tag of the favorites this weekend, Sunderland are not expected to deliver a defensively sound performance. Seldom have they kept clean sheets lately, and most importantly, they let in two or more goals in the last four h2h clashes in a row.

As such, it is logical to anticipate goals from both sides of the pitch.

Sunderland have been so consistent lately, that they lost just once since November – and this sole defeat came against the in-form West Brom.

At the same time, their counterparts have been in total freefall mode. They were winless in 10 of their past 11 fixtures, and the last they ever won on the road was three months back.

Likely, the Sunderland to Win bet at an odd of 2.50 is a good choice to make this weekend.

Going on, taking into account the defensive shortcomings of Sunderland, coupled with the goal-scoring traits of Swansea in h2h clashes, a high-scoring affair is expected. And for the reason, the Over 2.5 Match Goals wager at an odd of 2.00 is a great tip.