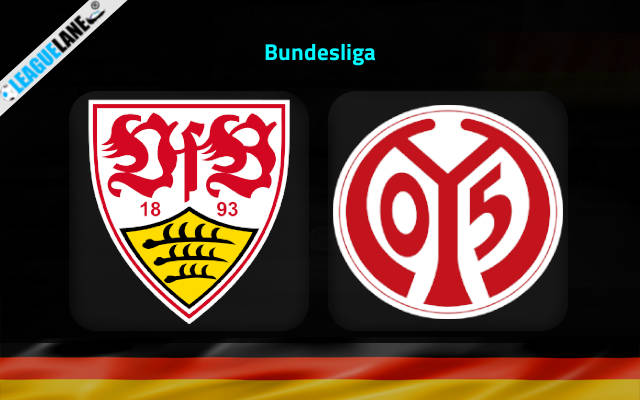 VfB Stuttgart vs Mainz 05 Predictions and Free Tips from our expert tipsters when the teams go head-to-head in German Bundesliga on Saturday, 21 January 2023.

Stuttgart made a mess of their starting to the campaign, but they are in the process of making amends for it. They won their last three straight appearances at home, and will be hoping for the fourth against their struggling counterparts.

Mainz are on a long stretch of winless games – most of them being losses. They are conceding goals in huge numbers, and lately they have been a total failure on the road. In fact, they lost four of their past five league fixtures away from home.

Stuttgart have an unbeaten record in the past three years in h2h clashes. In fact, barring a single draw, they have a 100% winning record. In fact, they even scored twice or more in four of the last five encounters.

And at home, they have a perfect winning record in the last four years.

Who will win the match between VfB Stuttgart and Mainz 05?

Stuttgart are on a winning streak at home, and are determined to keep the streak going. They also have a great h2h record against this rival in the last few years – and particularly so at home.

Meanwhile, Mainz last registered a win three months back, and they even lost four of their past five road trips.

As things stand, expect hosts Stuttgart to secure another win this weekend.

And it goes without saying that just how out of form the Mainz defense are right now. In fact, they let in seven goals from their past two road trips combined.

And with goals coming in plenty in h2h clashes too – expect a high-scoring affair this Saturday.

Stuttgart conceded two or more goals in three of their past five fixtures, and they failed to keep a single clean sheet at home in a league fixture all through 2022.

They might be the favorites this weekend, but chances are very low for them to register a clean sheet. And as such, expect goals to come from both teams.

As of now, Stuttgart are on a winning streak at home, and that too with great offense. They also have a dominant h2h record in the last four years against this opponent – who are currently on a long stretch of poor results.

As such, a win for Stuttgart at an odd of 2.50 would be a great bet for this weekend.

Now coming to goals, neither team has shown great defense lately, or throughout the campaign as well. And the same has been the case in h2h clashes too. And with both teams being desperate, chances are high for goals to come in huge numbers this Saturday.

Consequentially, the Over 2.5 Match Goals bet at an odd of 1.90 would be a good additional bet.