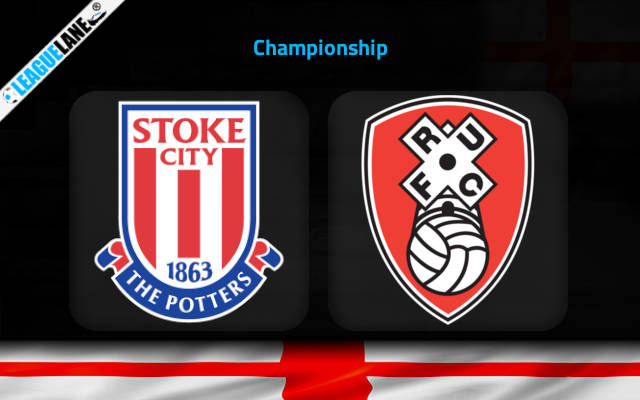 Stoke will be facing away team Rotherham at Bet365 Stadium in this Championship fixture on Tuesday.

Stoke had a season to forget in the previous season at English Championship as they finished at the bottom half in the league standings.

They finished 13th in the league table and was trailing just 13 points below the cut-off. This should have left a mark on them, but their so far display in the league does not show anything as expected.

However, Stoke has been displaying a slightly better performance in the past six fixtures than the opening seven games. After losing five of their first seven games, they lost only two of their next six fixtures.

Although there is no particularly satisfying performance, these stats will count when they face rivals Rotherham on Tuesday.

Rotherham is currently following an inconsistent form. It’s not good to see them coming into this away match without a win in their last four games.

Moreover, Stoke is currently sitting at the top of them in the table. If there’s something Rotherham owns better than the hosting side, it’s their defensive line.

Just because Rotherham’s defensive line is better than Stoke’s doesn’t mean that the Millers have an impressive defense. Apart from expecting to post one past the home side, the visiting rivals will not have any advantage here.

The Potters will hope for a similar result here following a 3-1 win against Sheffield United in the previous home fixture.

It’s been all too rare in recent times Stoke have not conceded. In fact, Stoke have failed to prevent goals in 5 of their previous 6 games.

Rotherham certainly have the ability to score against this Stoke team, although one goal probably won’t quite be enough to avoid a loss.