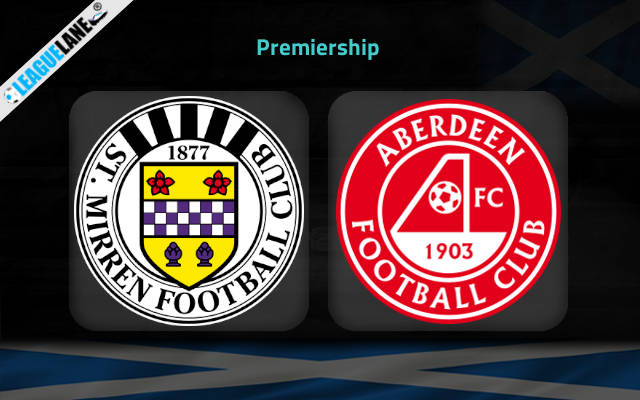 St. Mirren vs Aberdeen Predictions and Free Tips from our expert tipsters when the teams go head-to-head in Premiership on Saturday, 24 December 2022.

Aberdeen’s form is riddled with losses. They are losing every alternate game ever since their 2-1 victory against Motherwell back in October. They will risk losing their third position on the table if they don’t start winning consistently.

On the other hand, St. Mirren are on a four-game winless run. They managed to hold Rangers in a 1-1 draw recently. They have a decent unbeaten record at home this season.

At The SMISA Stadium, St. Mirren are on a two-game winning streak against this team. Both teams played against each other back in January this year and the host won that game by 1-0.

The game ended in a goalless draw when both these teams played back in May. The host are unbeaten in five of the last eight head-to-head meetings.

Who will win the match between St. Mirren and Aberdeen?

We are backing St. Mirren to take all three points from this game. They are the favourites to win as they have won last two consecutive head-to-head meetings at The SMISA Stadium.

The visitors have lost their winning form since October. They are on a two-game losing streak away from home as well.

The host scored one goal against Aberdeen at The SMISA Stadium back in January.

Both teams have scored in three of the last four head-to-head meetings at The SMISA Stadium since 2020.

You can back the following as our first tip is that St. Mirren will win this game– at 2.75 odd. The host have a decent unbeaten record at this ground against Aberdeen. They have won the last two consecutive head-to-head encounters.

Furthermore, our second tip for this game is that Mark O’Hara to score anytime – at 5.50. He scored two goals in his last three appearances. Moreover, he scored a crucial goal against St. Johnstone recently.