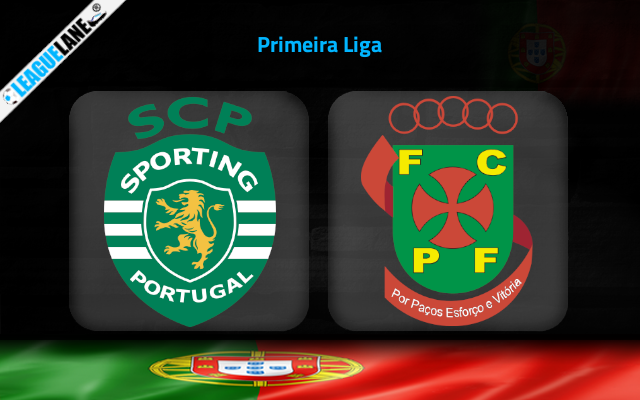 Sporting CP vs Pacos de Ferreira Predictions and Free Tips from our expert tipsters when the teams go head-to-head in Liga Portugal on Thursday, 29 December 2022.

Sporting defeated Braga by 5-0 in the Quarterfinals of Taca da Liga. They are in excellent form as they have won all of their games since November. They will now play against Pacos in the league for the first time at Estádio José Alvalade.

Pacos are at the foot of the table this season. It is very shocking to know that they are the only team in the league who have not won a single game in all competitions. They have only won two points till now.

Sporting have won this fixture consistently since 2015. Both teams last played against each other back in April and the host won that game by 2-0.

The last time the visitors won this fixture at this ground was nearly nine years ago.

Who will win the match between Sporting CP and Pacos de Ferreira?

The host are favourites to win this fixture. The are on a four-game winning streak at home. Moreover, they have dominated this fixture since 2015.

Not to mention that the visitors are yet to win a single game this season.

At Estádio José Alvalade the host have scored at least two goals in their last three wins.
We can expect the same trend to continue this time as well.

The visitors have struggled to score at At Estádio José Alvalade. The last time the visitors scored a goal was over five years ago.

The first tip is that Asian Handicap of -2.0 for Sporting – at 1.95 odd. They have scored five goals in their last two consecutive matches. Do also note that the visitors are yet to win a game this season.

Our second tip is that Fernandes Paulinho will score anytime – at 1.72. He scored four goals in his last two appearances. He scored a hattrick against Maritimo last time as well.