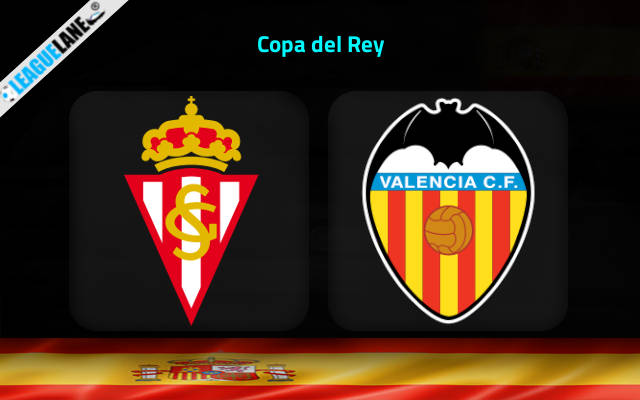 Sporting Gijon vs Valencia Predictions and Free Tips from our expert tipsters when the teams go head-to-head in the Spanish Copa Del Rey on Wednesday, 18 January 2023.

Gijon is not having a stellar run in Spanish Segunda Division this season. They are sitting 15th in the standings and are following a streak of four winless games.

However, back-to-back victories in the past rounds of Copa Del Rey outings have advanced them till now. But they wont have any easy go like before as they faces the Laliga outfits Valencia.

Their most recent meeting was during the 2019 Copa Del Rey match-day in which Valencia sealed a comfortable 3-0 win over Gijon.

Valencia won four of the past five encounters against Sporting Gijon at this venue. Four of the past six clashes at this stadium had fewer than 2.5 goals ft.

Who will win the match between Sporting Gijon vs Valencia?

Sporting Gijon is having a poor form at home lately. They are on a five-game winless streak at home in the league.Displaying such a weak form in the second division matches will give more advantage to the visiting side.

Moreover, Valencia were unbeaten in four of the past five road trips in the league. Thus, we expect a win for Valencia.

We expect this match to be in control of Valencia and they have an attacking side which have scored a total of 9 goals in last six outings across competitions. Since the numbers are well below 2.5, we don’t see the value of backing over 2.5 at 2.10 odds.

Gijon is a team that has been struggling to score even in the Segunda Division games at home. We don’t expect them to score past this Valencia defense on Wednesday. Therefore, both teams to score option is unlikely to land in this match.

Having a winless streak at home and Valencia’s impressive h2h form will stand highlighted here for Gijon. A victory for Valencia at 2.10 odds will be our main betting pick here considering all these observations.

For the second tip, we like to place both teams to score:no considering the weak attacking side of Gijon.