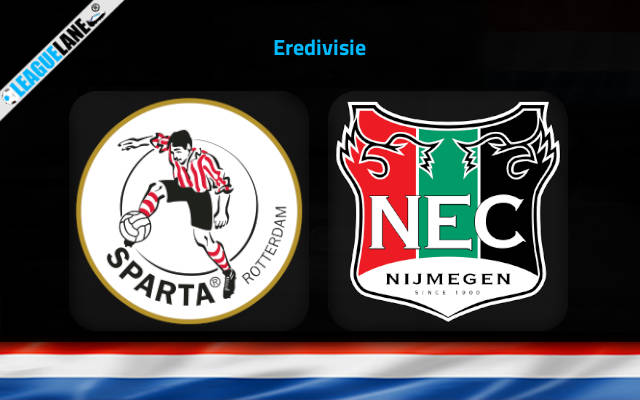 More than 70% of the matches have ended in a stalemate for NEC this season. They will look to end this streak as they will play against Sparta Rotterdam at Sparta Stadion Het Kasteel.

Sparta played a great game last time as they defeated Emmen by 3-1. Two late goals helped the team clinch their fourth win of the season. The team is currently in the sixth position.

The last seven consecutive matches have ended in a draw for NEC. No other team is going through such a winless drought. Most recently, they played against Excelsior which ended in a 1-1 scoreline.

They began this month by holding Feyenoord by 1-1. This result was very crucial for Rogier Meijer’s side. As it took them to the tenth spot on the table ranking.

One positive aspect about this team is that they can arguably be considered as one of the best defensive team in the Eredivisie. As they have only conceded seven goals this season.

However the supporters of NEC are growing restless as the lack of winning performances is affecting the team’s mentality.

Despite only winning once this season the team is not in the relegation zone. The credit for this achievement goes to the defensive backline.

It is surprising to note that the visitors have won only once this season.
Nevertheless, the last time the host lost an Eredivisie game was on the 11th of September.

Our prediction is that Sparta Rotterdam will win by 1-0 – the odd for this tip will be at 8.50. In four of the last six head-to-head encounters at Sparta Stadion Het Kasteel, the host have won this game by scoring a minimum of one goal.

Our next tip for this game is that Sparta Rotterdam will keep a clean sheet – the odd for this tip will be at 3.25. Both teams have played five games against each other since 2017. In which the host managed to keep a clean sheet in three of those matches.