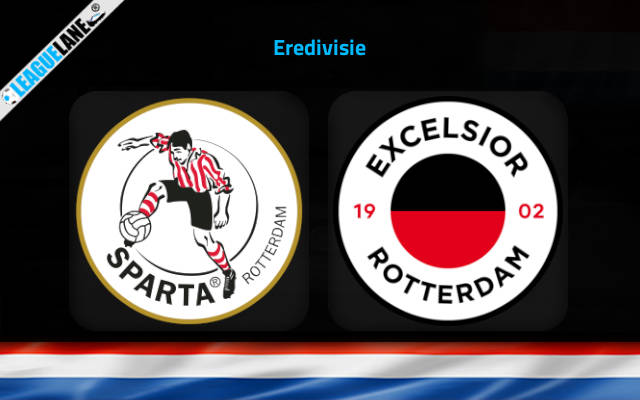 Sparta Rotterdam vs Excelsior Predictions and Free Tips from our expert tipsters when the teams go head-to-head in Eredivisie on Saturday, 14 January 2023.

Sparta are in great form at the moment, and particularly at home they have been one of the best teams over the course of the season. They are also high in confidence after holding titans PSV to a draw the last match-day.

Meanwhile, Excelsior are on a long stretch of poor performances. Most of their recent fixtures ended in losses, and all along they conceded goals in huge numbers.

Over the last two decades, Sparta have been the better team at this venue. In fact, they have lost just thrice in the past 25 years, and in the same period they failed to find the back of the net at this ground just once.

Who will win the match between Sparta Rotterdam and Excelsior?

Based on recent form, Rotterdam are huge favorites this weekend to deliver the win. They were unbeaten in nine of their past ten fixtures, and six of these were wins. And barring a draw against the fourth-placed Twente, they have a 100% winning record at this venue after August.

Meanwhile, Excelsior were winless in 10 of their previous 14 overall match-ups, and nine of these were losses. More importantly, they have a 100% losing record on the road this season, barring just two games.

Not only did Excelsior lose their past three road trips, but in the process they let in 15 goals. Their defense has been practically non-existent lately, and for sure the in-form Sparta will target them. Expect goals quite in plenty this weekend.

Sparta just recorded a 0-0 draw against one of the best teams in the league, PSV. Likely, it is a doubt if the struggling Excelsior will be able to test the hosts’ defense that much. Chances are quite low for the visitors to find the back of the net.

Rotterdam have a superb h2h record against this rival at this venue since 1998, and at present they are in fine form. Particularly at home, the team has been on a long stretch of impressive performances.

Meanwhile, Excelsior lost most of their recent games, and on the road they have been one of the absolute worst teams in the league. A -1.5 Asian Handicap at 2.40 odd on Sparta appears to be a great pick this Saturday.

Going on, taking into account the form of the hosts, and the out-of-form defense of the visitors, goals are expected in plenty. Likely, a Over 1.5 Goals in the Second Half bet at an odd of 1.80 will be a good second bet for the game.