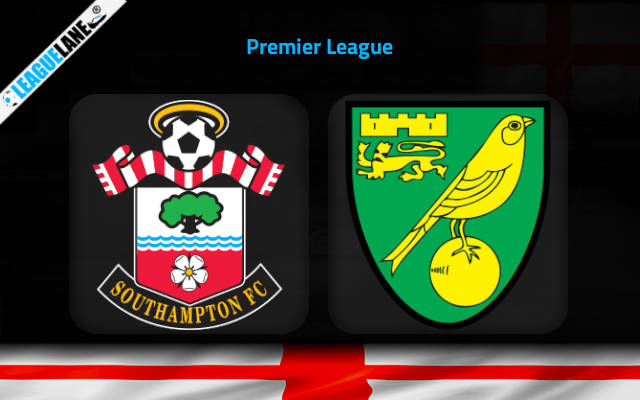 The Saints and Norwich City will raise the curtain on Gameweek 27 in Premier League in the Friday evening fixture from St. Mary’s Stadium.

Southampton will have a nice chance to maintain their fine spell of form and back up the weekend’s 2-0 win over Everton on the occasion.

Ralph Hasenhuttl’s men have been in great shape lately, winning two and drawing one of the last three Premier League affairs.

The stretch is even more impressive if we know it came against the likes of Tottenham Hotspur, Manchester United, and Everton.

Southampton have generally made St. Mary’s Stadium a fortress to conquer this season because they lost only one of twelve home outings in this term of Premier League, shipping no more than ten goals in the process.

The Saints could easily keep another clean sheet in front of their fans here against the rock-bottomed Norwich City who boast by far the weakest attacking record in the league.

The Canaries dropped to the very foot of the standings once again after suffering back-to-back losses to Manchester City and Liverpool in the last two rounds.

The match against Southampton does offer many more opportunities for success, but we are not quite confident in Norwich City’s result here knowing about the Saints’ recent form.

On top of having the worst attack, Norwich City have the weakest defensive record in the league. They allowed seven goals in the last two games (although they did play the likes of Man City and Liverpool along the way) and we feel they don’t have much to hope for here against in-form Southampton side.

The home win is the main betting pick at the 1.57 odds, while we will also back Southampton to keep a clean sheet at the odds of 2.25.