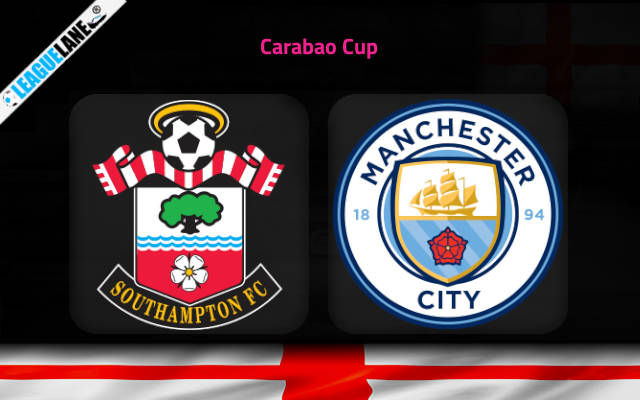 Southampton brought their three-game losing streak to an end on Saturday afternoon when they dispatched Crystal Palace 1-2 on the road in the third round of the FA Cup.

James Ward-Prowse and Adam Armstrong notched goals to complete a comeback after Edouard’s opener for the Glaziers four days ago.

The Saints have thus instilled some confidence into their ranks ahead of very important Premier League matches.

They sit at the very foot of the Premier League standings and they have the trip to Goodison Park to make on Saturday afternoon in what could be a crucial relegation-battle six-pointer for these two outfits.

This is why we would even not be surprised to see Nathan Jones resting some of his first-team regulars on Wednesday evening in the clash against Manchester City in the League Cup quarterfinal.

Speaking of rotations, Pep Guardiola will also certainly make some knowing about the tie against city rivals Manchester United on schedule for the early Saturday afternoon in the 20th round of the Premier League.

Guardiola rotated his starting XI heavily in the weekend’s FA Cup clash against Chelsea but it did not prevent the Citizens from snatching a demolishing 4-0 victory on the occasion.

Southampton have lost three games on the spin since the Premier League restart despite facing Brighton, Fulham, and Nottingham Forest along the way. They have one of the most important matches of the season on schedule on Saturday afternoon at Goodison.

Even without this match at Everton we would consider Man City enormous favorites here. It is very hard to back anything else but a commanding victory for the visitors. We expect Erling Haaland to get rested once again, meaning Julian Alvarez is a great shout for the anytime goalscorer pick at the 2.00 odds.