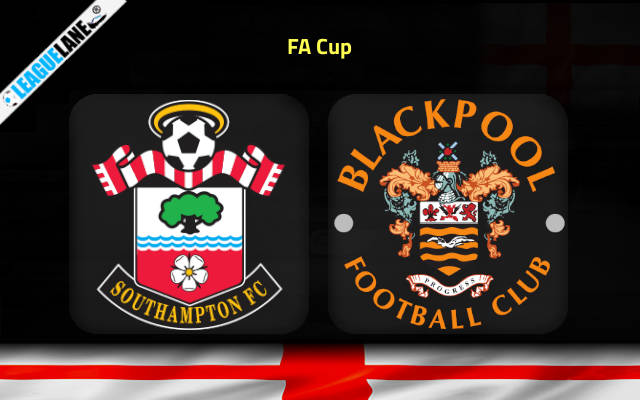 Southampton vs Blackpool Predictions and Free Tips from our expert tipsters when the teams go head-to-head in the England FA Cup on Saturday, 28 January 2023.

Neither Southampton nor Blackpool is having a decent form at their respective leagues at the moment. A slight advantage is for Southampton as they are involved in the Premier League.

Going on, the hosts head into this fixture after dropping into bottom of the Premier League table, losing matches consistently. Meanwhile, Blackpool is on a 10-game winless streak in Championship and are sitting second from the bottom of the table.

They have not locked horns in the past decade. Their most recent match-up ended in a 3-0 win for Blackpool.

At this venue, Southampton won two, drew one and lost one of their total four head to head meetings against Blackpool.

Who will win the match between Southampton vs Blackpool?

Although Southampton is having a weak form in the Premier League, they have been delivering impressive displays in other competitions despite of facing heavy outfits like Manchester City.

Going on, Blackpool has been consistently failing to post a three pointer on the road in their Championship matches. They doesn’t seem to have the potential to defeat Southampton and we expect a win for the hosts on Saturday.

Their most recent h2h meetings had goals in plenty. Considering the difference in competitive quality of both these teams, we expect this match to have over 2.5 goals ft.

Southampton won their previous FA Cup fixture against Crystal Palace with a 2-1 ft score. The competitive character of this match suggests a both teams scoring display which is ideal to back as an alternative pick.

We quite don’t see a draw scenario here. The stats and current performances of both inclines us to consider Southampton. In addition, Blackpool have not been able to win their past 10 Championship matches.

We therefore like to back Southampton to win at 1.55 odds as the main betting option. For the second tip, we like to place the over 2.5 goals bet at 1.73 odds instead of both teams scoring option.