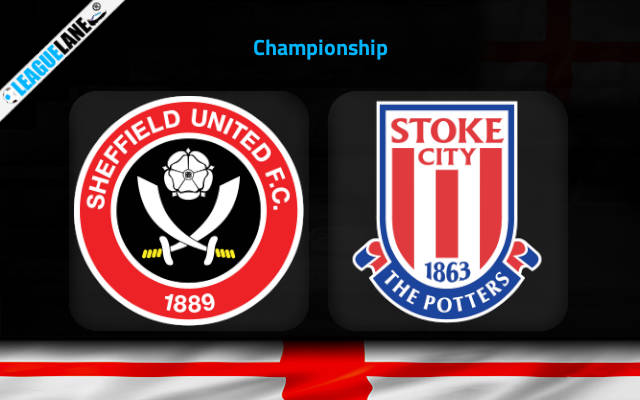 Sheffield United vs Stoke Predictions and Free Tips from our expert tipsters when the teams go head-to-head in Championship on Saturday, 14 January 2023.

Stoke lost their twelfth game of the season against Preston last time. The only positive result they picked up this month is their 3-0 victory against Hartlepool in the FA Cup. Now they have a crucial game upcoming up as they will face Sheffield at Bramall Lane.

On the other hand, Sheffield managed to win one point as they held QPR in an exciting 1-1 draw recently. They are second in the league and have a good record at home.

Stoke won both fixtures in 2022. It is a completely different story at Bramall Lane as the host are unbeaten in the last four years. Do note that the visitors won by 3-1 back in October.

Who will win the match between Sheffield United and Stoke?

The visitors are going through a downfall. They are struggling to win against mid-table teams. Not to mention that they have lost twelve games till now. Therefore, the previous record is not valid in the current situation and we can expect the host to win this fixture.

It is worth knowing that in three of the last four encounters, the game ended with more than two goals being scored. We can expect the same trend to occur this time as well.

It is likely that both teams will score. This is after considering that both teams have scored in the last two consecutive head-to-head meetings at Bramall Lane. The visitors despite being at the bottom half of the table recently scored three goals in the FA Cup match against Hartlepool.

The first tip is that Sheffield United will win this game– at 1.70 odd. They are second in the league and are unbeaten in all competitions since November. Back in 2021, they won this fixture at Bramall Lane.

Our second tip is that Both teams to score – at 1.83. Stoke have consistently scored in this fixture in the last four years. Also, the host are in good goal-scoring form. Therefore, we can expect both teams to score this time as well.